VirtuOz, which creates virtual agents to help companies automate sales and support, has raised $11.4 million in a second round of venture funding.

A virtual agent is a chatbot that answers customers’ questions — basically, it’s a middle ground between visiting a static web page and getting a human agent on the line. There are other virtual agent providers out there (such as Jellyvision), but chief executive Alexandre Lebrun says the competing products just identify keywords in your questions and provide a canned response. VirtuOz agents, on the other hand, can analyze the concepts in your query, and learn over time. Therefore the result is a lot closer to real conversation.

You can read more information about the technology here, but it may be more useful to actually see a VirtuOz agent in action, for example at the Kleiner Perkins-backed textbook rental site Chegg.com. I spent a few minutes talking Nina, the site’s support agent, and while I wouldn’t say “she” passes the Turing test, Nina was able to answer almost all the questions I threw at her. And according to VirtuOz’s claims, she would have become more helpful as we continued chatting.

The Redwood City, Calif.-based company (it recently moved from Paris) has created more than 25 chat agents in seven languages. Its initial European operations were already profitable, but VirtuOz raised the new capital to expand in the United States, Lebrun says. The question is whether companies will want to spend extra cash on this technology when they already have some kind of support website; Lebrun argues that VirtuOz agents actually save money by making companies more efficient — for example, customer email rates decrease by as much 50 percent.

VirtuOz has raised a total of $13.4 million. The new funding was led by Mohr Davidow Ventures, with participation from previous backer Galileo Partners and Eric Hahn of Inventures Group. 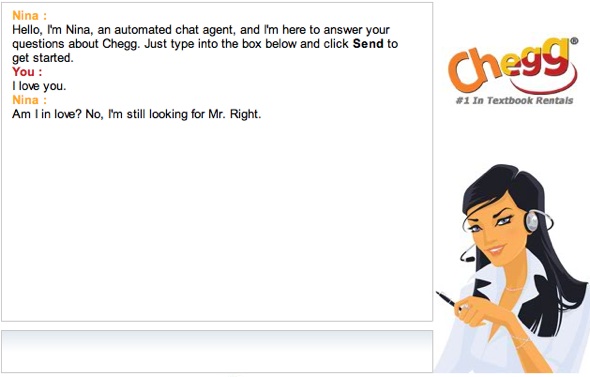