Instant message service aggregator Meebo is launching the first officially sanctioned version of Facebook’s IM service, Chat, to work on another web site. Basically, it lets you IM with friends who are logged into Chat on Facebook and chat with other friends on AIM, Gtalk, Yahoo Mail and other IM services all through a single interface. 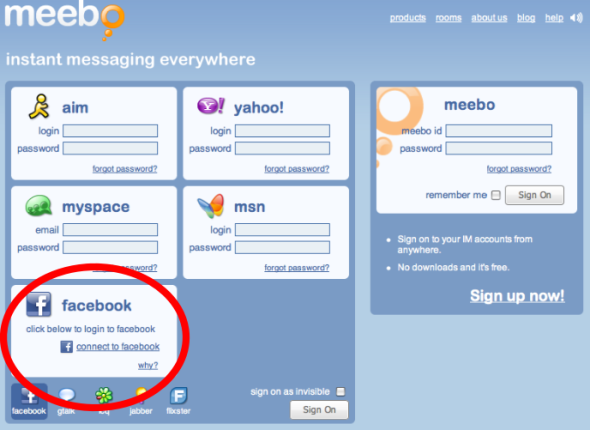 It’s an official implementation of Connect, Facebook’s service for letting third parties access Facebook data from other sites. Previously, Meebo tried integrating with Facebook Chat in December, but on its own and using a third-party plugin. (For whatever reason, Meebo worked directly with MySpace to integrate MySpace’s IM service with Meebo, which launched at the same time in December). Shortly thereafter Facebook made Meebo stop accessing Chat with the plugin — not because it didn’t want a third party accessing Facebook data but because the plugin posed a security risk. However, Facebook rewarded Meebo for its share-first-ask-questions-later approach by helping it set up Chat and become the “alpha” tester of what will soon be a more generally available “Connect + Chat” service for third-party developers.

The main difference users will see between the new official version and the old unofficial version of Chat in Meebo is the official notification pages that Facebook Connect shows when you’re connecting to it. For example, you’ll be asked to specifically let Meebo send and receive messages within Chat.