OneSpot, a company that helps websites offer links to relevant news stories elsewhere on the Internet, has raised $4.2 million in a first round of venture funding.

The most obvious comparison to the Austin, Texas company’s offerings is technology news aggregation site Techmeme. Like Techmeme, OneSpot generates a list of links to relevant news in a specific field, using an algorithm that prioritizes articles based on factors like links and whether a specific website is “trusted.” But OneSpot isn’t a standalone website. Instead, it creates widgets that publications can customize and embed on their sites. The company provides service to The Wall Street Journal and the San Francisco Chronicle similar to what Blogrunner provides for The New York Times.

OneSpot’s most notable success seems to be its partnership with the Wall Street Journal, which launched last June. At the time, the Journal only included a OneSpot widget in its Law section, but it has since added OneSpot to Technology, Health, Politics, Personal Finance, and Business. OneSpot founder and chief executive Matt Cohen said the widget won over the Journal’s business and editorial sides. 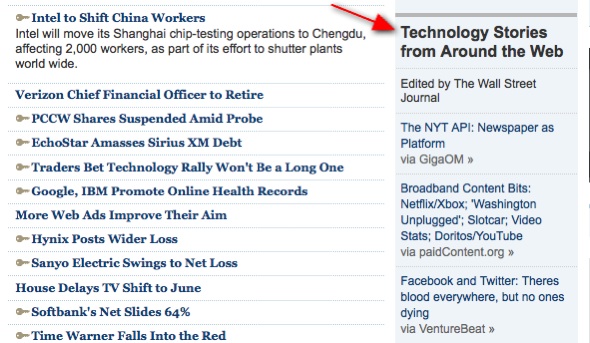 “Obviously, the business guys ask, ‘Are we getting more visits, are people staying longer?’ but from the editorial side the question is, ‘Does this make my site a better place for my audience?'” Cohen said. The Journal found the answer was “yes,” because it meant Journal readers saw even more relevant and comprehensive news coverage, coverage that wasn’t limited to what the Journal had the resources to cover. The fact that Journal editors only had to put in a few minutes of work a day to make it work didn’t hurt, either.

Next on OneSpot’s to-do list is expanding beyond big, traditional corporations to smaller publishers, although Cohen wouldn’t offer many specifics about the next product. When that happens, OneSpot will be competing with blog-recommendation tools like Outbrain, which provides the “you might like” recommendations at the end of each VentureBeat post.