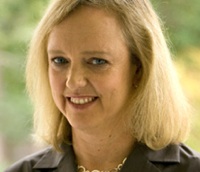 Meg Whitman, former chief executive of ecommerce giant eBay, has taken her first step in a run for the California governor’s office. Whitman announced on her new campaign website today the formation of an “exploratory committee” to seek the Republican nomination.

Despite never having held elected office, Whitman has already enlisted backing from prominent Republicans — most notably former Governor Pete Wilson, who is chairing her campaign. Whitman doesn’t have a full platform up yet, but the general principles on her site stick pretty closely to the pro-business, socially moderate Republican mold set by politicians like Wilson and Arnold Schwarzenegger (who is being termed out).

Her promises include creating jobs through lower taxes and “efficient government,” improving education through teacher recruitment and accountability, increasing alternative energy in a business-friendly way, and embracing the state’s diversity while enforcing immigration laws. The New York Times said Whitman’s announcement sounded “as if she were running for chief executive of California.”

“California faces challenges unlike any other time in its history — a weak and faltering economy, massive job losses, and an exploding state budget deficit,” Whitman said. “California is better than this, and I refuse to stand by and watch it fail.”

Whitman, 52, served as eBay’s CEO for more than a decade, growing the company from $4.6 million to almost $8 billion in annual revenue. She recently entered the political arena by serving as one of the national chairs of John McCain presidential run. (Of course, that McCain’s bid didn’t go so well, and now that I mention it, eBay’s core business is struggling as well.)

Serious rumors about Whitman’s run for governor began earlier this year. Other contenders for the Republican nomination include Insurance Commissioner Steve Poizner and former Congressman Tom Campbell; Whitman and Poizner are both expected to dip into their personal fortunes for the race. On the Democratic side, Attorney General Jerry Brown, San Francisco Mayor Gavin Newsom, and Senator Dianne Feinstein are all said to be considering a bid.