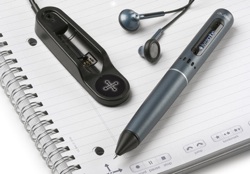 Livescribe, which makes a smartpen that includes its own display, microprocessor, and audio recorder, has raised another $10.175 million in funding.

The Pulse pen’s recording feature means users have an audio recording to supplement and correct their hand-written notes. That’s something I would have loved as a student, and could be even more useful to me now, as a journalist. The product is targeted at professionals and college students. On Feb. 17, the Oakland, Calif. company is also taking the Mac version of its software out of beta testing (which is started last November.)

Livescribe says it will be expanding internationally and opening its third-party application store later this year. The app store is perhaps the most promising thing about the Pulse, since it turns the smartpen into a platform for a whole bunch of business and productivity applications; more than 2,900 developers have already signed up to use the Livescribe platform.

The company has been getting a lot of positive press, stretching from the DEMO God award in January 2008 to a “Best of Show” award at the most recent MacWorld. The pen went on sale in June, but Livescribe isn’t releasing any sales numbers. I wouldn’t be surprised if they’ve been low, especially for the last few months. Many potential buyers probably view the Pulse as a luxury that can be cut from the budget in tight times.

The round was led by Lionhart Investments and Vantage Point Venture Partners. This brings Livescribe’s total funding to more than $40 million.

Update: A Livescribe “campus representative” popped up in the comments below and is offering a discount for VentureBeat readers.