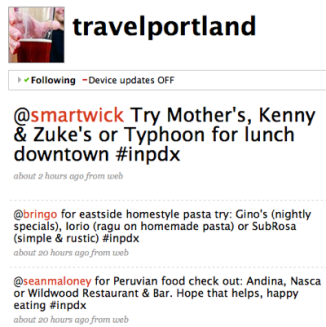 If you use Twitter and you’re planning to visit Portland, Ore., here’s an easy new method for finding your way around. You can get recommendations for where to visit, eat and shop in the city from the Twitter account @travelportland.

First, send a tweet concerning what you want to know, with the hashtag #inpdx. The Twitter account, called the “Twisitor’s Center,” is staffed by people at a private non-profit called Travel Portland, an official Portland tourism and visitor promotion organization. They’re checking for tweets with the #inpdx tag, and they’ll respond with their recommendations.

The hashtag is also a way for any other Twitter user in Portland (or who just happens to know the city) to share tips with visitors. Anyone can see all of the tweets with the #inpdx hash tag on the hashtags.org site or through Twitter’s search feature.

More generally, the “Twisitor’s Center” is the sort of clever, niche use of Twitter that is becoming more common as mainstream web users find out about it (another is Qwitter, an app that helps you stop smoking by making you accountable to other quitters — Wired has a look at a bunch, here). The new Portland service was thought up by Goseetell, a company that builds travel-related web services. It will be interesting to see this company (and others) develop a stand-alone travel-tips site that uses Twitter to guide people in any location — a sort of central travel site for Twitter users that directs people to hashtags for particular cities and regions. Or it might make for a good feature on an existing travel web site.

[Update: Indeed, Goseetell has just launched a sort of Twitter travel aggregator site, as mrstoll tells us in the comments.]