Ever heard the phrase “why is everyone always talking about Twitter?” Well, here’s the reason, maybe. The micro-messaging service is getting half of social network Facebook’s press coverage, according to Google Trends stats for both companies in the U.S. — even though searches for Facebook dwarf searches for Twitter. Why are there more searches for Facebook than for Twitter in the U.S.? Because Facebook has more than 46 million monthly active users here while Twitter gets an undisclosed, but certainly lesser amount of twaffic, I mean traffic. 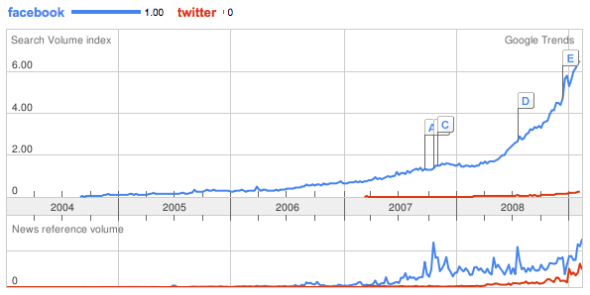 In terms of traffic comparisons between the two sites, the most recent I’ve seen comes from third-party analytics firm Compete. It showed Facebook receiving more than 68 million unique visits in January while Twitter got less than six million (this doesn’t include the unknown number of users who access Twitter and Facebook via third-party services). I’ll let you do the math. Suffice to say, one is left wondering why the certainly-much-smaller web service is getting so much press coverage relative to its usage.

Perhaps the press corp is just really in touch with Twitter’s inevitable national domination; this implies the average reporter is just really in touch with the future of technology these days. I’m going to bet against that. Another alternative is this: the nature of public micro-messaging is something that us reporters intuitively understand, and know how to use — and like to cover, like I’m doing now. Indeed, while Facebook is designed to be semi-private and a reflection of your real-world relationships, Twitter is used by many journalists to promote their own articles. They both have their own uses, for different groups of users. But perhaps all of this press coverage of Twitter will actually get the average person using it more?

Thanks to occasional VentureBeat contributor Doug Sherrets for the link. You can follow him on Twitter here as well as myself and fellow VentureBeatniks MG Siegler, Dean Takahashi, Anthony Ha, Chris Morrison, Tam Vo, Camille Ricketts, Dan Kaplan and Matt Marshall. We have a VentureBeat account (for our posts) as well. You can friend me on Facebook — if we already know each other in real life.