As the number of third-party applications on social networking site Facebook continues to grow (despite regular changes to Facebook’s platform), the site and developers are still experimenting with ways to make money with apps. For example, the site recently started testing ads that run within apps. But there’s an untapped opportunity for subscription-based apps, says Zuora, a startup that provides online services to manage companies’ subscriptions and billing operations. Now Zuora is launching Z-Commerce for Facebook, which provides developers with the infrastructure they need to offer subscriptions to their apps on the site.

Zuora chief executive Tien Tzuo notes that there are more than 50,000 apps and more than 600,000 developers on Facebook’s platform, and that the vast majority of apps try to make money with advertising — a model that may not be a great fit for the some or for the site. Especially as more productive, business-oriented applications move onto Facebook, there’s a growing number of apps that users might be willing to pay a small subscription fee to use.

“We think there could be a whole class of applications that people would be willing to pay for,” Tzuo says. “Why hasn’t it happened yet? Well, there’s a lot you have to do.”

In fact, Facebook’s developer site includes a discussion of subscriptions on its page about common business models, as well as links to payment tools like Amazon Flexible Payments, PayPal and Google Checkout. But just like the version of Z-Commerce that Zuora rolled out for cloud computing developers in January, its tool for Facebook developers is a more full-service solution. It includes a console for managing user subscriptions, access control to ensure that only subscribers access the app or sections of the app, and commerce widgets that plug into apps. You can see a diagram of how Zuora’s access control and commerce widgets work together below. 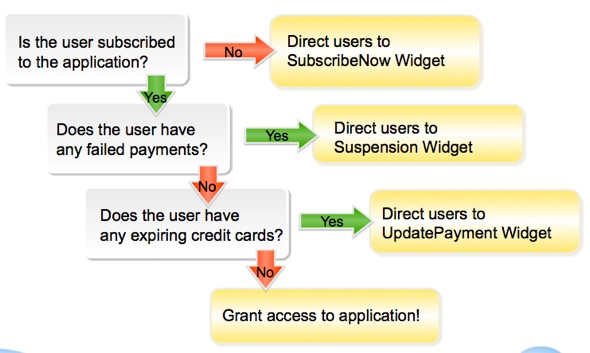 Redwood City, Calif.-based Zuora is announcing its Facebook solution today at the DEMO conference in Palm Desert. It’s also launching a contest for Facebook developers to submit apps for which subscriptions might be a good fit; five of these entries will receive free access to Z-Commerce for Facebook for a year. Go here for more information.

Zuora has raised a total of $21.5 million in venture backing. Competitors include Aria Systems and Vindicia, neither of which offers a Facebook product.
http://services.brightcove.com/services/viewer/federated_f8/980795693