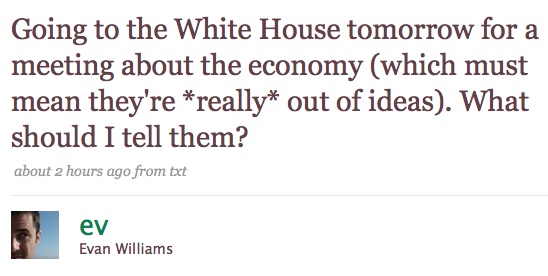 When President Barack Obama was inaugurated, I wrote a post about the new presidential website titled, “WhiteHouse.gov takes a page from Twitter’s playbook.” At the time, I thought the headline was a joke — because, ha ha, no one would expect nuanced policy discussion on the micro-blogging site with a 140-character limit — but it looks like I was actually peering into the Twitteriffic future.

On Friday, 20 “young business leaders” are headed to the White House  to discuss the economic crisis. Among those leaders are investor and former Googler Chris Sacca and Twitter co-founder Evan Williams (insert obligatory joke about Twitter’s business model here), and both of them decided it would be a good idea to ask Twitter users for suggestions. Even using Twitter’s new front-and-center search feature, I haven’t been able to count the flood of the responses, but there are a lot — Williams alone seems to receive a new policy suggestion every few seconds.

Now, I’m a bit skeptical that many worthwhile ideas will come out of this attempt to tap the wisdom of the crowds — Sacca and Williams both seem like really bright guys (duh), but this is an exercise that begins, “Guys, give me an economic stimulus plan in 10 words or less!” so, uh, yeah, I have my doubts. But as a peek into the Twitter hive mind, it’s much more fascinating than, say, the list of Twitter trends.

Naturally, there are quite a few platitudes about entrepreneurship and innovation, plus some complaints that the media reporting on bad news is making things worse (surprise! I disagree), but I was glad to see some genuinely thought-provoking tweets, as well as delightfully out-there thoughts, not to mention a few good jokes. Here are some favorites, good and bad:

“Ask for government data to be available in machine-readable formats. More eyes poring over data will catch problems earlier.”

“you could say that we are all in this together. this economic downturn is being felt even in mongolia and it could get much worse here”

“you could tell them to talk to Rep. Ron Paul. He has a fantastic economics policy!”