I’m back from the DEMO 2009 conference — a whirlwind, two-day immersion in technology trends, startup concepts and new investment strategies. Hundreds of VCs, engineers and executives descended on Palm Desert, Calif. earlier this week to demo their products, network, party and participate in the next wave of innovation.

It only makes sense to turn to social technology to gauge the conference’s influence on its followers and the broader tech community. To do so, I used a tool called SM2 by Techrigy to collect streams of data on where and how DEMO was covered by blogs, video sites, Twitter, etc. — and to model the results.

The Impact of DEMO Live

For the first time this year, DEMO partnered with Facebook and Bitgravity to produce DEMO Live, a real-time video stream of the conference’s sessions. Viewers from around the world had the chance to engage in live conversation with each other and actual DEMO attendees. More than 230,000 people visited the DEMO Live page during the two days to ask questions, comment on each of the 39 product demonstrations — and often to share their unbridled enthusiasm for some of the new concepts taking the stage. Here’s how it looked:

DEMO Live attracted some notable personalities over the course of the conference. Ryan Carson, Josh Elman, Randi Zuckerberg, Lee Lorenson and Mano Marks all had something to share (both related to DEMO and not). 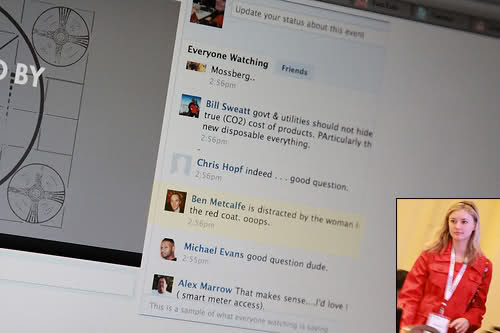 The DEMO experience and social media

The way the conference was structured, all attendees were packed into the main ballroom to watch the product demos. Each company had six minutes to either launch itself or make a major product announcement for the first time. As you can imagine, the charged environment lent itself to a lot of continuous and passionate discussion — and, given the crowd, most of it took place online through every channel possible. In addition to casual spectators, the press showed up in force. AllThingsD’s Kara Swisher, WSJ’s Walt Mossberg and CBS’ Larry Magid, among many others, all came to scout out the newest trends and companies. Investors like Prashant Shah of Hummer Winbald and Jeff Clavier also came out to look for new startup trends. And corporate development folks like John Barad of Nvidia and Midori Loyla of Microsoft came to look for potential startup partners.

That brings me to DEMO’s social footprint. Between tech groupies, the professional media, the startup community and the VC establishment, the conference made a substantial splash on the social web. See below for data showing just how substantial.

DEMO excitement and its echoes

Here’s a breakdown of how and where people watched this year, as well as a roundup of some of the top DEMO-linked tweets (Twitter stats came from another web tool called Hootsuite):

Using SM2, we counted 2,578 references to DEMO 09, including 937 tweets and 508 blogs. Keep in mind that it didn’t draw from any of the talk on the DEMO Live site. Here’s an overview of the shape DEMO’s footprint took:

<
You would think that most of this talk, from punditry to casual conversation, would express strong viewpoints on the products being launched. But SM2 actually found that the vast majority of  comments made were neutral in tone. Those that weren't were either positive, or very positive. Here are the full results of this metric analysis:

SM2 crawls the web searching for tweets, blogs, wikis and forum references that include keywords that the user defines. I used “DEMO Conference,” “DEMO 09,” etc. It then sets a popularity rank between one and ten for each tweeter or commenter based on their followers and based on Compete and Technorati ratings for bloggers. SM2 then lists the entries it finds matching the keywords while taking popularity into account, and creates graphs modeling the data.

One of the most widely-discussed aspects of the show was the new DEMOBeat series of panels on social media, productivity tools, and energy management solutions, pioneered by VentureBeat editor in chief Matt Marshall. The first session, addressing new opportunities in social media, included all of the major influencers in the space: Dave Morin of Facebook shared Facebook Connect, Max Engel of MySpace demoed MySpace ID on AOL, Google’s Kevin Marks presented Friend Connect, and Jason Smarr of Plaxo showed off its OpenID solution. These companies are direct competitors, vying to open up social media data across the board for the same audience. Predictably, the lineup drew a lot of interest from people who weren’t even physically there. Though, not altogether surprisingly, the companies emphasized that they plan to work together to make OpenID the standard.

The energy panel, showcasing three companies on the demand-side of energy reduction, also generated a lot of response. The headlining product was Google PowerMeter, a device that can track the energy consumption of household appliances. It marks the beginning of a new path for the search giant — capturing the fascination of even the unsavvy masses.

Sudha Jamthe has attended DEMO since 2000, first as an entrepreneur launching a startup, then as a marketing vice president, a startup advisor, and most recently as a social media advisor. She can be reached at @sujamthe on Twitter.