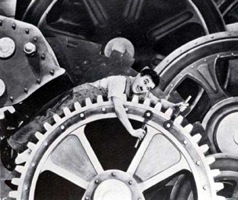 Amazon’s Mechanical Turk is a powerful tool for “crowdsourcing” menial or repetitive tasks — companies like Dolores Labs and Smartsheet are even building software to make Turk easier for businesses to use. But it turns out Mechanical Turk isn’t all about serious work; it can also be used for strange and wonderful art projects too, like the just-announced Bicycle Built for Two Thousand.

Here’s how it was made: Aaron Koblin and Daniel Massey sliced up a MIDI file of the song “Daisy Bell” (which was the first song performed by a computer, and which was immortalized by the HAL 9000 computer in the film 2001: A Space Odyssey — so much so that we’re still referencing HAL when we talk about the modern Mac computer voice). Then those portions were put up on Mechanical Turk, where 2,000 people sang tiny pieces of the song without knowing anything about the bigger picture. Finally, all of those performances were blended together into the song you hear at the end of the video below.

So how does it sound? Not bad, actually — I find it more transcendently weird than listening to performances from around the world on the popular iPhone app Ocarina or YouTube’s collaborative orchestra, even if it lacks the soul of HAL’s rendition in 2001. And when it comes to showing how Mechanical Turk can turn thousands of people into cogs in a giant machine (yay?), it’s a more compelling demonstration than The Sheep Market, which was Koblin’s first art-y Turk project. And hey, people got paid six cents per performance this time, up from two cents for The Sheep Market.

I was also curious what an actual musician thought of the final result. My friend, the composer Jeffrey Treviño, immediately declared his own obsolescence. Or something:

I love sexy, gimmicky design projects that can be considered and discarded in two minutes. Who needs novels and symphonies? Soooo booooring.

http://vimeo.com/moogaloop.swf?clip_id=3571124&server=vimeo.com&show_title=0&show_byline=0&show_portrait=0&color=ffffff&fullscreen=1
Bicycle Built for Two Thousand from Aaron on Vimeo.