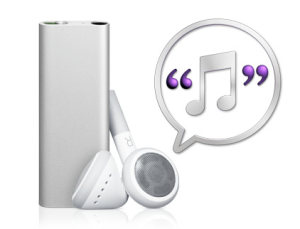 One nice feature on Apple’s new iPod shuffle is the new VoiceOver feature, which communicates the name of songs and playlists through speech. What’s especially interesting about the feature is that you hear a different voice depending on whether you’re syncing your iPod shuffle with a Mac or a PC. And, not surprisingly, the Mac voice is much clearer.

Apple demonstrates the difference in both its walk-through video and on this page. The OS X Leopard computer voice is a smooth, clear, male voice not too unlike HAL 900 from 2001: A Space Odyssey. The PC voice, which is female, is fast and tinny.

While I’m sure Apple doesn’t count on such a small feature tempting anyone to switch from a PC to a Mac, it’s also interesting that Apple’s older operating system, OS X Tiger (10.4), also has the PC VoiceOver voice. When you hear it, it’s almost like it’s saying “time for an upgrade,” without saying it.

The stated reason for the difference is that OS X Leopard has this nicer voice built-in. So I’m going to assume that when you sync your iPod shuffle with your computer, it transfers these little recorded song titles and playlist titles over to the device. Otherwise, if it’s handled on board the new device, why the difference?

I can’t help but wonder if we’ll see this difference illuminated in a new “I’m a Mac” versus “I’m a PC” commercial. I can see it now: Don’t have the actors who play the respective roles say a thing, just have the VoiceOver voice for each platform do the talking.