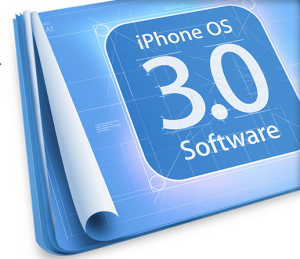 At its iPhone 3.0 preview event today, Apple started off with some impressive numbers for the iPhone/iPod touch and App Store, then went into some of the new software development kit (SDK) features (like Push Notification) and then did some app demos. But that wasn’t enough. The real crowd-pleaser came after when Apple announced over 100 new features for the iPhone 3.0 software. Most importantly, these new features included three of the big ones that people have been waiting for: Copy and paste, MMS and search.

Perhaps it’s the fact that copy and paste is such a simple set of tasks that is standard on all modern computing interfaces, that made users so angry that it wasn’t on the iPhone. Well now it is — and its announcement drew a monstrous applause at the event. And it looks like it will work well. You simply double tap on any bit of text, then a “cut, copy, paste” menu bubble will appear right above it. This action will work across apps, which means you will be able to copy something from one, and paste it in another. And you can also copy photos from somewhere and paste them somewhere else — like an email.

Speaking of photos, MMS was another absent feature that drove users wild, again, likely because it’s fairly standard on all modern cell phones. MMS is better known to some as picture/video messaging. While you will now be able to send picture messages, video is still a no-go, as it seems that Apple still isn’t providing a way to use the iPhone’s camera to encode video in the new SDK. But along with pictures, you will also be able to send contact information, audio and location data. The latter could be very useful for some of the location-based apps.

Back in November of last year, there was a rumor going around that Apple was working on its own search engine. At the time, I noted that while I didn’t think it was working on something to compete with the likes of Google in web search, I did think it was working on a way to better search across the range of devices it now makes. Today, the first step of that may have been announced with Spotlight for the iPhone.

There are a ton of other new features, but some of the notable ones include:

Voice Memos: You can now record audio directly with this app. This will likely kill several apps that are already in the App Store that serve this purpose. You can even edit the audio you take with this app.

CalDAV: This is an online calendar protocol that will open up the iPhone’s calendar to other data besides just what is ported over from iCal/Outlook on the computer. Most of the big players support this protocol, such as Google, Yahoo and Microsoft Exchange. You can also now subscribe to calendars via a standard called ICS.

Stocks: You can now get news headlines about certain stocks within the Stocks app.

Shake to Shuffle: Just like the newer iPod nano has.

Notes sync: Thank God. It was just silly that you couldn’t do this previously, now taking notes on the iPhone will actually be useful.

Tethering: While it wasn’t highlighted in the event, during the Q&A session, Apple did confirm that it was coming, but declined to give a time-table.

While it wasn’t talked about, on the screen during the presentation, you can clearly see “Live streaming” listed as one of the new features. Now, Apple didn’t say anything about video encoding from the iPhone’s camera at this event, but it’s possible that it is finally going to allow companies like Qik to access the camera legally to shoot and stream video. 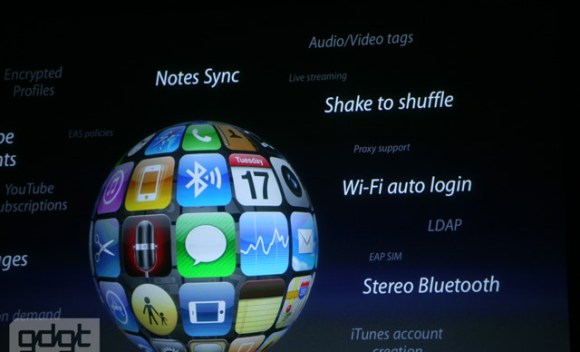 I say legally, because Qik has had this working outside of the traditionally SDK bounds for a while. It, and the other companies that do this, actually had to make their own software video encoders to get it to work. Now will Apple allow them into the App Store? We shall see.

The new iPhone 3.0 software will be available at some point this summer. Apple didn’t give a specific date, but you can bet it will be sometime around its WWDC event, which is likely in June. Apple may or may not have a new piece of iPhone hardware to show off at that time as well.

The new software will be free for existing iPhone owners and $9.95 for iPod touch users. Even owners of the original iPhone will be able to get the new 3.0 software, but two of the features: MMS and AD2P will not work on that device.

Developers will be able to get the new SDK now.