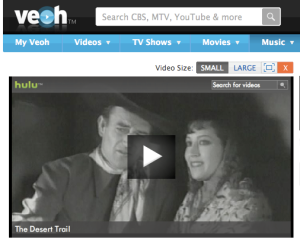 Online video service Veoh is said to be undergoing a major restructuring tomorrow, a source close to the company tells me, that could include large layoffs and a potential change to its product strategy. [Update: We’ve since confirmed the layoffs and restructuring, more at the bottom of the post.]

Back in October of last year, the company denied a report that it was laying off 40 percent of its workforce, and instead announced cuts of between 15 to 18 people in one of its Russian offices. Still, I’m hearing the company now has substantially fewer than the 110 employees it had back then, and that number looks to drop much further as soon as tomorrow.

While my source wasn’t sure of the exact numbers, they called the layoffs “drastic,” saying the company could be left with just a small part of its current workforce. [Update below.] And word is that the remaining workforce could focus on smaller projects like its Veoh Compass product, which is a browser add-on that recommends videos to you as you surf the web.

While Veoh started out as primarily a user-generated video content sharing site, it more recently morphed into a robust video portal featuring premium content. The problem with user-generated content is that YouTube absolutely dominates it, and the problem now in the premium content space is that Hulu is starting to dominate it. That leaves Veoh as an expensive-to-run other option.

And while Veoh serves up content from both of those sites (through embeds), it would seem that viewers aren’t finding a good reason to go to a portal as opposed to the actual sites themselves. Various analytic sites show that the service’s main veoh.com page has been losing traffic in recent months. That is not good news when the company just raised another $30 million round back in June of last year. This put Veoh’s total funding at about $70 million over four rounds and put its valuation at roughly $125 million.

But that last round came before web advertising started collapsing. With YouTube and even Hulu having difficulties monetizing its content, you can be sure that Veoh has had even more difficulties. The service just launched some new anime shows, some of which are only for adults, but that won’t help when it comes to monetization.

I’ve reached out to the company for a comment, but have yet to hear back.

Update: NewTeeVee has been able to confirm the layoffs with another source, and pegs the number at “more than 40 people,” which is about half the company. They also note that some of the management is included in the layoffs.

Update 2: MediaMemo has more, including the press release from Veoh. Notably, chief executive Steve Mitgang is being replaced with founder Dmitry Shapiro. There will now be a focus will be on the Video Compass project as we mentioned last night. But Shapiro claims “only” 25 people have been let go, less than the more than 40 NewTeeVee had heard, and slightly less than what we had heard as well. Still, that’s a huge layoff, as the company will now only have a staff with 40 some people — almost a third of what it was a few months ago.

Update 3: I just spoke with Shapiro, who reiterated that the number of employees let go today was 25. He also confirmed that he has stepped in as chief executive, a roll he held after he originally founded the company in 2005. These moves are part of an effort to “streamline” the company, with a new focus on its Compass product.

The reasons for the moves are two-fold: First, while the company is still seeing growth in its monetization efforts, it is not cash-flow positive. While the company has taken in nearly $70 million in funding, “we want to use it wisely,” Shaprio said, meaning that it was burning too much of it the way things were previously working. A much smaller workforce will help that, but Shapiro notes that the company will continue to support Veoh.com.

But, at the same time, the focus will shift to the Compass product, which Shapiro is very excited about (of course, he did invent it). He notes that Veoh has seen over 25,000 new installs a day of the Compass and that millions of searches and video recommendations are already being served through it, even though it has only been around for a few months.

Shapiro decline to talk specifics when it comes to monetizing the Compass product, but he noted that he believes it will be primarily advertising-based, just as Veoh.com is. He went on to say that ad targeting will likely be central in its monetization.

Find the company’s press release below:

VEoh NETWORKS TO Intensify FOCUS ON ITS SUCCESSFUL

SAN DIEGO, CA (April 1, 2009) – Veoh Networks, one of the leading innovators in the online video arena, announced today that the company will be focusing its efforts around its highly successful Veoh Video Compass™ application. Video Compass is a browser plug-in that makes video discovery a truly seamless experience, enabling video to be played while on every major search engine, portal and commerce site. It enhances the browsing experience by surfacing recommended videos that are relevant to a consumer’s search terms. These video recommendations – based on the viewing behavior of millions of online video users – make it easy for consumers to discover and watch videos from an index of millions of videos from around the Internet. Veoh adds over 25,000 new Video Compass users daily and supports millions of recommendations each day on major web sites such as Google, Yahoo!, YouTube, Ask, MSN, Amazon, IMDB, Craigslist, eBay, Wikipedia, etc.

Meanwhile, Veoh.com, the company’s popular video portal, continues to generate more than 200 million video streams each month from a wide range of independent and traditional content publishers such as ABC, CBS, ESPN, Viacom, and Warner Bros. The site reaches over 23 million unique users each month with average engagement time at more than 100 minutes per user, and helps dozens of blue chip advertisers reach a broad and highly targeted audience.

As part of Veoh’s continued focus on innovation, Dmitry Shapiro, Veoh’s Founder and Chief Innovation Officer, will be stepping in as CEO. Shapiro replaces Steve Mitgang.

Shapiro stated, “Veoh was founded in early 2005 when video on the Internet was at its very beginnings. Today after four years of being a pioneer in the online video space, we know a tremendous amount of what viewers, publishers, and advertisers want. We have always believed that video discovery and personalization are ultimately the important problems to solve in the world of billions of videos, and have invested heavily in technologies to support that belief. Video Compass is the latest innovation from Veoh that makes video discovery omnipresent.” Video Compass can be downloaded at http://www.veoh.com/videocompass/.

As part of this new concerted effort, Veoh will be streamlining its organization to better enable the company to focus on providing compelling offerings to consumers, partners, and advertisers.

Veoh Networks is an innovative Internet Television company that delivers broadcast-quality video programming via the Internet. Veoh has more than 100,000 content publishers – from CBS, Viacom’s MTV Networks, ABC, Warner Bros. Television Group, ESPN and Lions Gate to thousands of independent filmmakers and content producers. For advertisers, Veoh offers compelling ways of engaging with a targeted audience and measuring performance of their ad buys.