Super Rewards is expanding its virtual currency from social networking applications to the entire web today. So far, this currency has been a good way to make money for social networking applications like Mob Wars (pictured) — some apps are making more than $1 million a month with its help. Like rivals such as OfferPal, Peanut Labs and Gambit, Super Rewards offers what amounts to an incentive-based marketing service where users can click on advertisers’ offers to receive points they can use to buy things like virtual items in an online game. 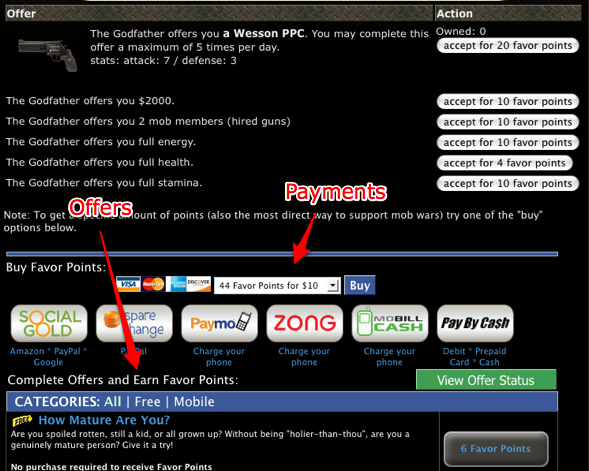 But how much money will be developers be able to make on these sorts of offers going forward? Some critics wonder if offers will lose value the same way that incentive-based banner ads (like “win a free iPod”) did on the web over the last decade. It may be that virtual currencies stay valuable in the long run only through users paying real money to get virtual money. Vancouver, Canada and San Francisco-based Super Rewards is doing both, at least. It tells ReadWriteWeb that it gets about 75 percent of its revenue from advertising offers, with the other 25 percent coming from an option to buy goods directly using real money in credit cards and other forms of payment.

Here’s more on the issues around incentive-based advertising, from a recent and scathing post by Niki Scevak, founder of real estate agent and lender review site Homethinking:

[C]ustomers or leads who have signed up through incentive marketing turned out to be the worst ever. At the first Leadscon in Vegas last year many presenters used the ‘Free iPod’ guys as a throw away line for terrible lead quality. The average length of a customer if they signed up for a subscription product was 6 months and leads received through the mechanism were of terrible quality. And guess what? The incentive marketing folks were the largest buyers of social networking traffic in its nascent stage. Although Facebook applications reach users efficiently through engaging them in fun and useful games vs the free ipod guys showing display ads alongside social networking sites, the source of the traffic is essentially the same. Granted, social networking has become mainstream in the 4-5 years since the heyday of incentive marketing but the parallels are clear.

Last August, blogger Andrew Chen brought up the same issues in an article looking at the dismal history of online offer revenue. At that point, Super Rewards rival Offerpal responded with a range of reasons why its business should continue to be a good one. It said it works with developers to build better game mechanics for offers, it optimizes and tries to increase the number of offers that game players see — and perhaps most importantly, sees players losing interest in games themselves faster than they stop using offers.

I asked Super Rewards chief executive Jason Bailey about these issues. More than six months later, the data he provides below seems to support his rival’s points:

“90 percent of new advertisers coming into our channel find substantial value in the leads that we generate and continue as Super Rewards customers month after month. While we do provide consumers a token virtual currency incentive, this is purely for entertainment, with no transferable economic value, a far cry from the free-iPod or cash back practices that caused problems during the bubble.  The market has come a very long way since that time and is much more transparent to all parties involved, advertisers, publishers and consumers. We work proactively today with all our advertisers to find the right pricing for their leads, examining relative conversion on our platform versus other advertising channels. An auto insurance quote provider may pay $10 per lead generated through search or email, while through our virtual currency channel they may only pay $6, but get the same performance.  Our list of top 10 advertisers is a who’s who of online direct marketing leaders, most of which who have been with us from the beginning and who see Super Rewards as one of their top sources of leads.

So who’s going to keep using Super Rewards and its ilk?

Netflix, Blockbuster and Columbia House are highly sophisticated companies with strong analytical tracking technologies who specialize in comparing customer acquisition cost to lifetime customer value. We have worked together to figure out the value of leads in our system long ago, and continue to refine the platform targeting, advertising creative and incentive threshold to maximize performance. The social application channel has been proven out over the past 15 months with advertisers demanding more and more traffic.  The average advertiser cost per lead across our platform today is 50% higher today than it was 12 months ago.  That doesn’t look like doom to us…

Those numbers sound like they’re going in the right direction. But offers on social networks are still a relatively new way of making money. Perhaps, as Scevak put it in his post, “[i]nstead of Netflix being willing to pay $9 for each wannabe Mob boss who signs up to a trial, they’ll pay $3. And the monetization metrics of Facebook apps will plummet.”

However the offers market ends up in the long run, today’s move by Super Rewards is a good one. Aiming for the entire web could increase its number of clients, and so the number of people willing to pay real money for virtual money.