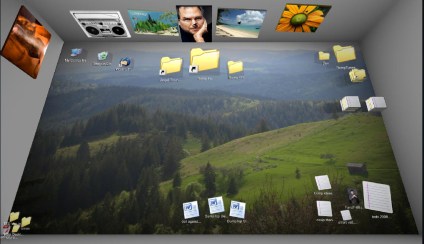 Microsoft’s Windows desktop isn’t nearly as efficient at using space as a real desktop. That’s what Anand Agarawala concluded more than five years ago, when he began to study ways to create a better user interface for the screen that computer users stare at all day long.

Today, he’s launching BumpTop, a downloadable software program that overlays Microsoft’s various Windows operating systems — XP, Vista and the upcoming Windows 7. It turns your desktop into a kind of 3-D view, where you can stack icons or similar-looking files together. You can grab icons with your mouse — or, with Windows 7, your own fingers via a touch screen — and toss all of your photos or documents into a pile. Since it appears to have a vertical dimension but the viewpoint doesn’t change, it’s called “2.5-D” instead of true 3-D. Full 3-D is possible, but it can be very disorienting for users who aren’t accustomed to it.

“We feel we’re overdue for a fresh approach to the desktop,” Agarawala said in an interview. “It’s too easy for desktop items to be lost or forgotten. The interface is impersonal and rigid.” 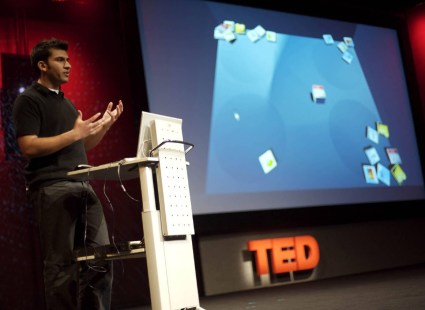 BumpTop could be a more productive use of Windows real estate because it’s just like your regular desk. You can stack piles of similar things on top of each other, allowing you to view at a glance a broader group of items than you can with the two-dimensional view that Windows offers you.

Agarawala, 27, (right) started work on BumpTop for his master’s thesis. He graduated in 2006 and turned the project into a real company in Toronto in 2007. He presented the idea publicly at the TED conference in early 2007, stirring up a lot of interest. He received funding from as-yet-unnamed sources and hired 10 people to turn it into a product. 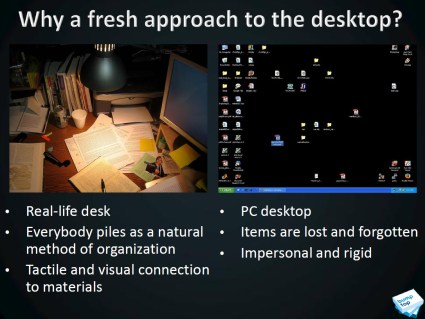 It could gain traction in part because Microsoft has left a gigantic opening for rival desktop interfaces. The Windows interface is mostly two-dimensional and hasn’t changed dramatically in a long time. With Windows Vista, the company explored a lot of 3-D concepts but, even with 10,000 people working on the project, it ultimately retreated and trashed most of the ideas.

One of the surviving features was the unsatisfying Windows Flip 3D feature, which let you look at a bunch of web pages with a 3-D view as if you were flipping through a circular Rolodex. That feature required more memory and a decent 3-D graphics card to run properly. 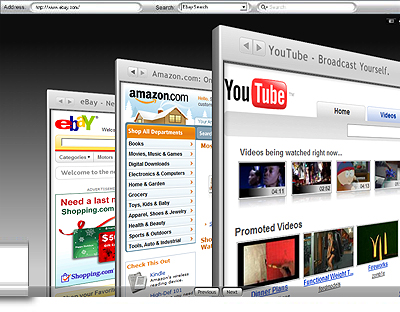 BumpTop can get by with a 1.4-gigahertz processor, a gigahertz of main memory, and an integrated graphics card. Those components aren’t necessarily all that demanding. But if you have lots of items on your desktop, it will slow down and choke on the processing task. It’s better to use a machine with a dedicated 3-D graphics processor.

One rival, besides Microsoft itself, is SpaceTime 3D, which created a web browser that could present web pages in 3-D (above, right) so that you could see more pages at the same time. But SpaceTime 3D isn’t as customizable as BumpTop. 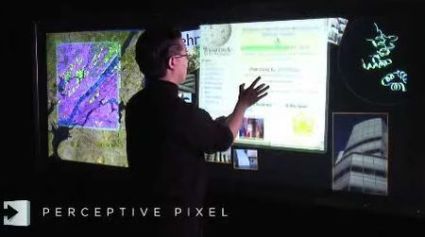 Another rival is Jeff Han’s Perceptive Pixel company, which has a futuristic user interface built into touch-screen flat panels. Han’s technology has been showcased on CNN, which used the touch-screen interface to display maps on election night. But the technology is still expensive. Microsoft has its own Surface tabletop touch-controlled user interface, but those machines are also very expensive now.

So BumpTop’s arrival as a free application could be very timely. With BumpTop, you can use a pen, fingers, or mouse to “throw” a document on a wall or scrawl a sticky note and make it big enough to remind you of an important task. You can also toss a memo onto the desk of a colleague who is also running BumpTop. When you look at a pile, you can right click to bring up a circular menu and then choose a view, such as fanning out the items in the pile, to make it easier to see what’s there.

As you can see from the pictures, you can post things on the walls surrounding the flat part of the BumpTop interface. You can make any document, app or photo grow or shrink. The more you use something, the bigger its icon becomes on the desktop. You can decorate the walls as you like. 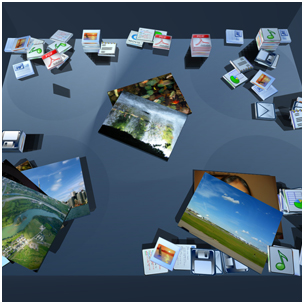 So far, 30,000 or so users have been testing it for as long as a year. Some have created their own custom desktop themes that others can use. Agarawala said the company is in talks with computer makers to see if they will include it in upcoming models.

Over time, the company will phase in new features and introduce a premium $29 version. That will include live support and features such as the ability to move items to a univeral serial bus flash memory drive by tossing documents onto a USB icon. Right now, it doesn’t work on a Mac. But the Mac OS already incorporates plenty of 3-D features and so isn’t in as desperate need of a makeover as Windows.