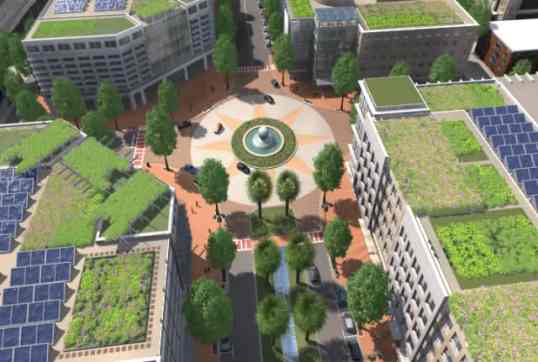 Utopian experiments have finally gone high-tech. Today, Florida real estate developer and former NFL linebacker Syd Kitson announced his intention to build the U.S.’s first city powered entirely by solar energy. Dubbed “Babcock Ranch,” the 17,000-acre community — 20 miles from Fort Myers on the Gulf Coast — will include residential, commercial and industrial zones and draw all of its electricity from a 75-megawatt solar array operated by Florida Power & Light (twice the size of the current largest photovoltaic plant in the world) [Update: This is incorrect. The largest solar plant in the world is in Olmedilla, Spain at 60 megawatts].

With 6 million square feet of inhabitable space — including 19,500 homes — Kitson estimates he needs to attract at least 45,000 residents to his $2 billion ranch. To do so, he plans to advertise 20,000 available, permanent jobs (a rarity in this economy), good schools, acres of wilderness preserves and open space, and the opportunity to reduce your carbon footprint to nil. As far as what kind of jobs the city might offer, Kitson says he’s encouraging companies that make solar installation equipment, lithium-ion batteries and other cleantech gadgetry to relocate to the city — transforming it into a hub for research and development as well as testing.

After laying the foundation for the ranch next year (construction is slated to start at the end of 2009), Kitson says he plans to integrate other renewable energy sources into the city, turning it into a sort of “laboratory” for the new energy economy, according to the New York Times. Already, the city is designed to run on an integrated smart grid that will let residents and businesses track exactly how much energy they’re using in real time. Kitson says he hopes to fund much of Babcock’s development with capital from outside sources. Morgan Stanley ponied up half the funds Kitson used to buy the ranch in the first place, but no other firms have been publicly tapped.

So far, plans for construction are getting the thumbs up from green technology and environmental groups around the state. It helps that Kitson bought the land from a family that had used it for damaging lumber and ranching operations. So many are happy to see it restored with what seem to be pretty pure intentions in lieu of being sold off in pieces. It hasn’t been all sunny skies for Babcock, however. Kitson’s company, Kitson & Partners, has been shaken pretty badly by the financial and housing crises, forced to lay off employees and watch its debt rating plunge. These conditions may result in construction delays but aren’t expected to halt the project altogether.

Speaking of the timeline, after breaking ground this year, Kitson says the downtown area should be standing by the middle of 2010, with residential and commercial buildout scheduled for the following fall and winter. This is good news for Florida Power & Light, which will not only get the distinction of holding the record for largest solar facility in the world, but will also more easily hit the renewable energy targets outlined by governor Charlie Crist. Legislation that will likely pass this year would make it mandatory for all electric companies to generate at least 20 percent of their power from renewable sources by the year 2020.

It seems noble for FPL to position itself on the right side of these well-intended laws, but smaller solar companies and trade groups have expressed concern that the Babcock Ranch project will only establish the company’s dominance in the renewable space, squeezing out independent players that would provide more jobs and cost-effective energy. Right now, FPL is executing on plans to build two plants in DeSoto and Martin Counties, capable of producing 110 megawatts combined. They will be the first two utility-scale solar facilities in the state, giving FPL a distinct upper hand. Regardless, Kitson seems undeterred, marching ahead with plans to start construction on the $300 million plant before the year is out.