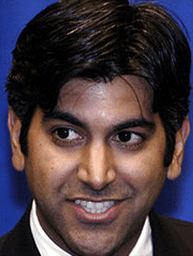 It took months for President Barack Obama’s administration to name a chief technology officer, and the winner may not be a Silicon Valley name like so many predicted, but we finally have one: Aneesh Chopra. As the Secretary of Technology for the Commonwealth of Virginia, his job has been to “leverage technology in government reform, [promote] Virginia’s innovation agenda, and [foster] technology-related economic development with a special emphasis on entrepreneurship.”

But Chopra’s not a tech guy. Before he got his secretary job in 2005, he was a managing director at the Advisory Board Company, a public-market health care think tank, as well as an angel investor. While relatively inexperienced, he’s focused on health care issues, trying to use information to make health care more affordable for poor people. This matches the Obama administration’s increasing focus on trying to reform governmental health care, and likely contributed to him getting the job. He also was part of Obama’s tech policy team.

Chopra’s apparently thinking along the lines of Vivek Kundra, another Washington, D.C. area technocrat, who will be Obama’s new chief information officer. They both talk a lot about making the government more open. As the city’s former tech officer, Kundra did things like holding contests for developers to build apps that use city data. Chopra is holding a contest to get developers to build free educational iPhone and iPod apps that in some form teach middle school math. In case you’re wondering how the two will work together (beyond holding more contests for developers), here’s the official statement:

Chopra will promote technological innovation to help the country meet its goals from job creation, to reducing health care costs, to protecting the homeland. Together with Chief Information Officer Vivek Kundra, they will help give all Americans a government that is effective, efficient, and transparent.

I expect the two will be spending more time in Silicon Valley– and already there’s been some mingling on that front. Chopra recently riffed off his Virginia title, talking about the do-it-yourselfness of the “commonwealth” — as opposed to “state” — concept to Silicon Valley guru Tim O’Reilly. As O’Reilly wrote about the conversation.

Commonwealth emphasizes the value that we create by coming together. Technology provides us with new ways to coordinate, new ways to govern and to regulate, but we should never forget that these are merely means. The end is a better society. And that starts with us.