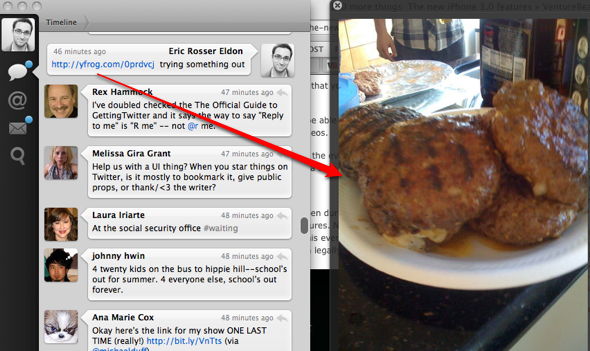 Twitter‘s traffic could more than double this month to above 30 million unique visitors on its web site in the US alone (that’s not counting Twitter traffic on other applications nor traffic outside the US). Expect to see the number of third party developers building applications for Twitter increase accordingly — and that’s what media-hosting startup ImageShack is betting on.

Today, the company is releasing Tweetero, an open-source Twitter client for the iPhone and iPod Touch that’s designed to smoothly display media on 3G networks. The idea here is that ImageShack is helping other developers build in quality media experiences for their own Twitter clients using Tweetero code — encouraging them to pay Imageshack to host their images (and soon, also videos). For example, the Tweetero interface lets a user upload an image to Twitter from their iPhone, and complete the message before the photo has fully uploaded. The images are then hosted on ImageShack’s yfrog media hosting service — which itself has been seeing substantial usage lately. Launched in February, yfrog already lets users upload photos and share them via yfrog shortened URL links they send to Twitter, such as http://yfrog.com/0prdvcj (see lower screenshot).

Bigger picture, Yfrog was the company’s first foray into Twitter and mobile. Cofounded four and a half years ago by early Googler Jack Levin, ImageShack already has 33 million unique visitors to its media hosting site. And that site is paying for itself, Levin says, through a mixture of ads and premium services. While its traditional web rival has been other photo-hosting sites like News Corp.’s Photobucket, ImageShack’s move into Twitter puts it up against Twitter photo apps like Twitpic. Levin says Twitpic is a destination site trying to drive people to it in order to make money from things like ads, rather than trying to also be a hosting service for on third parties. (Photobucket, he adds, has its own Twitter and mobile hosting efforts in the works). In other words, ImageShack’s well-developed media content delivery network is what is giving it a leg up for the time being. 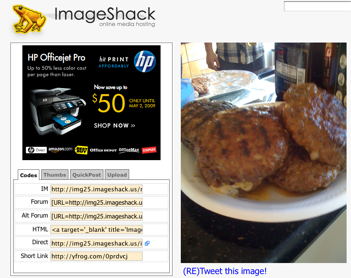 The Yfrog service has started getting more substantial uptake since it launched, Levin tells me, because other third-party applications are directing more users to it. Those include popular Twitter-iPhone apps Tweetie and Twittelator as well as Twitter-Blackberry app TwitterBerry. When a user uploads an image to yfrog, whether on its home site or on a third party app, their followers see their tweet with the shortened yfrog URL, which directs them to a page showing the image on the ImageShack site. Most recently, Tweetie’s brand-new Twitter-reading Mac desktop application is using it (see upper screenshot). Click on a yfrog link in the app and you’ll see a window with the image pop up on your desktop without visiting the yfrog web page. For developers, the yfrog application programming interface uses Secure Sockets Layer (SSL) to make third-party access, an advertising-free iPhone media player, and optimized image-handling for the iPhone.

ImageShack, contrary to the name, isn’t just about hosting images — and this is part of the company’s plan with Tweetero. ImageShack is going to let people host and share videos on the site very soon, Levin says, including high quality H.264 standard videos. Developers can use ImageShack to both stream videos to phones and potentially from phones (while Apple doesn’t yet let third party apps legally film videos using the iPhone camera, for example, it could start letting that happen soon). If Tweetero catches on now, ImageShack hopes the tool will help it get the hosting business from a wide range of Twitter-connected apps that somehow use media. Of course, we’ll see what PhotoBucket and other media-hosting companies offer — and also what larger web-hosting services like Amazon and Google introduce to take advantage of the Twitter ecosystem.

Besides its own revenues, Los Gatos-based ImageShack has also raised $11.5 million from Sequoia Capital, Levin says — a little less than what we’d heard last fall — on top of previous funding from Index Ventures, and Felicis Ventures.