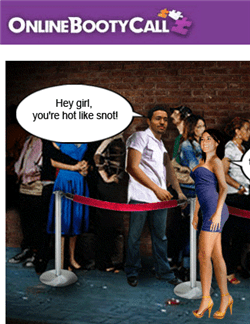 The site, started by Moses Brown six years ago, has done great: It’s now throwing off $100,000 a month in profit and is on track to rake in $10 million in revenue this year, up from about $5 million last year, according to a source familiar with the company (Update: The company is not confirming the numbers in our report; it says we’re not 100 percent accurate, however it does say we’re in the “ballpark.”) That’s pretty impressive for a company that has taken no seed cash to get it started. It has 3 million active users, based on visitors accessing the site at least once in the past six months (Compete, a traffic-measurement tool, shows about 800,000, but that’s based on 30 days).

Now the company wants to be more. It wants to raise between $2 and $3 million from investors in an effort to go mainstream, we’re hearing in the wake of the company visiting several venture capital firms in Silicon Valley recently. It wants to create new sites such as “Hisway” and “Herway,” with the goal of becoming a more general content company. It’s sales pitch: It can apply the same financial efficiency it has shown at OnlineBootyCall to growing these other sites. Brown has pulled in Chris Dunn to be chief executive. Dunn has a track record of leading several well-known companies, such as BubbleMotion (CFO & COO), a private company backed by Sequoia Capital, and larger companies Covad Communications (CFO) and Santa Cruz Networks (COO & CFO). Brown, meanwhile, has a background in database administration.

The question the company hasn’t answered for investors: Why would it be successful in these more general areas? Adultfriendfinder, another site that helps people hook up, did well because it focused on doing one thing. The founder, Andrew Conru, another eccentric and geeky mechanical engineer, owned something like 99 percent of the company (again because he took hardly any outside cash), and sold it to Penthouse for a whopping $500 million. His trick: He kept his site racy and didn’t get distracted with grand visions of making it more than what it could be. This wasn’t the Silicon Valley way, but it was his own way.

So don’t be surprised if Silicon Valley venture firms stay away from OnlineBootyCall. VCs have long shunned racy sites like this, anyway. Brown is likely to get advice to just milk what he has, and then sell it at the right time and walk away incredibly rich.