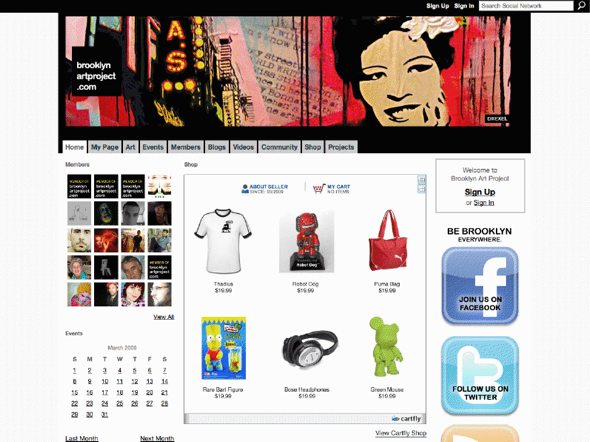 Create-your-own-social-network provider Ning has offered a developer platform for years — users across its one million social networks could add simple music players, slideshow applications and more. But now Ning is taking the platform concept to the next level, letting people who create social networks to offer applications to anyone who joins their network.

So if you create and own a network on Ning, you can install applications that anyone who joins your network will automatically see. Before, individuals had to add applications on their own — there was no simple way to syndicate them across a Ning network.

For example, bands that have built fan social networks on Ning — like Good Charlotte and 50 Cent — can begin offering ticket sales through apps created by Ticketmaster and Live Nation (for large acts) or through Amiando and other event ticket sellers (for smaller acts and other events). In total, more than 90 applications will begin going live in private beta testing today. Network owners — not just musicians but religious groups, hobbyists and many more — have been asking for a wide range of specific features for years, and this is Ning’s way of giving them what they want, chief executive Gina Bianchini tells me.

Another example is Cartfly, a service that lets social networks and web page owners offer customized catalogs and an e-commerce “shopping cart” purchase system. The Brooklyn Art Project could begin using Cartfly to sell works for the emerging artists that it has already brought together (the screenshot above is just a mock-up). Cartfly would keep a small portion of the revenue from sales, with the Brooklyn Art Project and its artists keeping the rest.

Ning itself is also sharing revenue with application developers in some cases, although it says that’s not the norm nor the focus, Bianchini says. So how do applications make themselves available to network owners on Ning? Each one goes through a rigorous review process to make sure that it interoperates with Ning’s software, and fits the needs of the network owners themselves.

Overall, Ning networks are adding between 85,000 and 100,000 registered users a day, mostly through people inviting each other, for a total of around 24 million registered users. Of the one million social networks, around 200,000 are currently active.