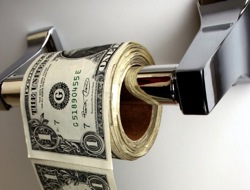 Microsoft has raised $3.75 billion in extra cash through its first ever sale of bonds. The software giant says it plans to spend the money on “general corporate purposes,” such as funding stock repurchase program that would increase earnings per share, and on capital expenditures — specifically, according to Bloomberg, on data centers to help Microsoft compete with Google on web search (good luck with that).

The bond offering follows a period of bad news for Microsoft (not that it’s been much better for anyone else), including a first quarter that saw the company’s first-ever year-over-year drop in revenue, and 3,000 layoffs that eliminated a big chunk of Massive, the company’s in-game advertising business, among other things. Yet the analysts quoted by Bloomberg seem pretty positive on the move, saying it makes sense given Microsoft’s high credit rating (making the bonds an appealing purchase for investors) and its low stock price (lowering the cost a stock repurchase program). Microsoft had previously discussed selling bonds for its abortive Yahoo takeover, so it’s no surprise that today’s news has already sparked speculation about potential acquisitions.

This may be a smart move, but it also makes a real contrast with the Microsoft of 2004, which was sitting on so much cash that it paid out a special $32 billion dividend to investors.