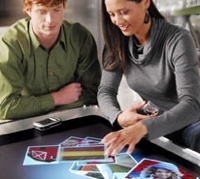 There have been unconfirmed rumors that Microsoft is developing a new version of its Surface tabletop computer, but in the meantime the software giant is rolling out improvements to the version that’s already out there. As you might expect given its newness, Microsoft is still trying to help users and developers of Surface applications wrap their heads around the multi-touch interface, and that’s what many of the features in this new Service Pack 1 try to accomplish.

The improvement users may notice immediately is a something that Microsoft calls “No Touch Left Behind.” Brad Carpenter, the general manager of software development for Surface, says users occasionally have trouble figuring out whether they’ve touched the Surface at the right spot. SP1 gives users more visual feedback about where they’ve touched and where they should have touched to select a specific item. (By the way, I’m usually loathe to pretend I know anything about branding, and there’s no denying that the “No Touch Left Behind” nickname is catchy . . . but the first thing it brings to my mind is a failed educational program.)

Another new feature is 128-bit identity tag resources, which allow the Surface computer to run new applications when you place a physical object (that was previously tagged) on the computer. For example, if you’re in a hospital (one of the businesses that Microsoft is trying to sell to) and you place your doctor’s business card on the Surface, the computer could bring up a map leading to their office. The Surface now supports running applications in the background, and Carpenter says there are also new features for Surface developers to improve the multi-touch interactions allowed in their applications.

Since Microsoft’s Professional Developers Conference last fall, Carpenter says the number of official partners developing applications for Surface has tripled from 60 to 180, and the software development kit has been downloaded more than 1,500 times. That may seem a bit low compared to the numbers you hear for other Microsoft platforms, but keep in mind that even though the Surface is a cool device, it’s also somewhat narrow in its reach. In other words, it’s not a computer you can just buy and take home, but rather one used primarily by businesses.

Lastly, Carpenter says the Surface is officially branching out for use in the hospitality business, adding to previously announced support for indusries like health care and finance. The hospitality industry has already been the source of some of the Surface’s most high-profile uses, for example at Sheraton hotels.