DocStoc , the site that lets you post, share and embed PDFs, documents and other files — much like its prime competitor Scribd — has emerged from beta with a new look and a new business model . While the site is growing rapidly — now with 4.8 million unique monthly visitors — it’s still running to catch up.

Changing the way it brings in revenue, the company has introduced DocCash, a program that will split Google AdSense revenues with users who opt into online advertising next to the documents they’ve uploaded. The homepage has also been redesigned to attract viewers, highlighting documents that are somehow relevant to current events. It is now easier to navigate for users and viewers, as well — making up for the polish it has been lacking since its inception. 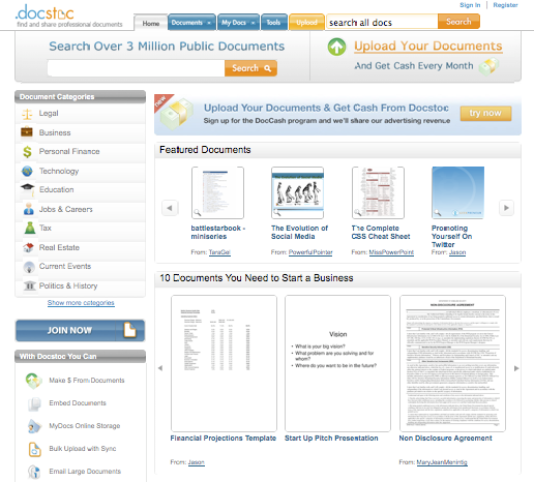 Another boon for DocStoc’s users: The site has opened up its API so that other web sites can use the same posting and embedding technology themselves. Visitors to these sites can now search for and preview documents as well.

But DocStoc isn’t the only service of its kind that has continued to innovate. Not only does Scribd continue to grow, pulling in 50 million readers every month, but smaller rival Issuu is also adding features to give document storage more of a social, community feel. That company has also done a good job of attracting enterprise customers with offerings such as subscriber management tools.