Market research firm Nielsen recently published a report, Twitter Quitters Post Roadblock to Long-Term Growth, which stated that Twitter’s first-month retention rate was 40 percent. That is, only 40 percent of Twitter users tweeted the month after they joined. Is Nielsen right? Should Twitter be worried that it nobody is sticking around?

Comparing Twitter’s retention to Facebook and MySpace, the report’s conclusion is pretty grim:

Twitter has enjoyed a nice ride over the last few months, but it will not be able to sustain its meteoric rise without establishing a higher level of user loyalty.

But, to answer the question for myself I took a random sample of over 100,000 Twitter users and examined their behavior.

My data show that Nielsen’s report is too superficial and unfairly penalizes Twitter, underestimating Twitter’s long-term retention rate by as much as 60 percent. And because most of Twitter’s growth has occurred in the last two months it would be premature to say anything about whether it is sustainable or not.

What Is Nielsen Measuring? 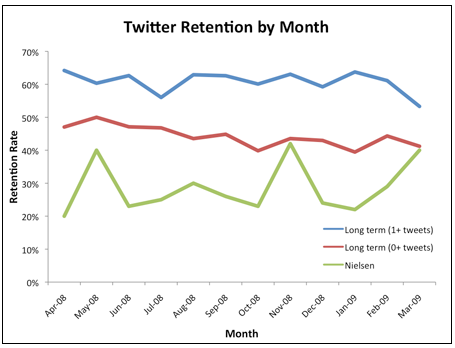 Nielsens’s report equivocates about what, exactly they are measuring. Quoting David Martin, Vice President, Primary Research at Nielsen Online: “We still maintain that the majority of people who sign up for Twitter won’t be around in a month.”

This isn’t even what their own report says. Their report states that 40 percent of users fail to return to Twitter in the month immediately after they join. It says nothing about the second, third, or fourth months after they join.

For example, if I join Twitter in January but don’t tweet until March I would be considered a “Twitter quitter” in Nielsen’s report. This behavior is common on immature social networks where new users who join don’t yet have any friends or followers.

It also turns out that a large portion — over 20 percent — of the people who fail to return the next month never once updated their status. It seems unfair to penalize Twitter for users who sign up and never tweet. After all, one could just as easily pretend they never signed up and the retention rate would increase by 50 percent in April alone, from 40 percent to 60 percent.

Accounting for these two failings in Nielsen’s report dramatically changes the picture of Twitter’s “dismal” retention.

So, Nielsen’s numbers may be technically correct, but they miss the bigger picture and unfairly penalize Twitter. These numbers are actually conservative because we only count users who return and tweet in our retention rate, while Nielsen also counted users who returned but never tweeted. 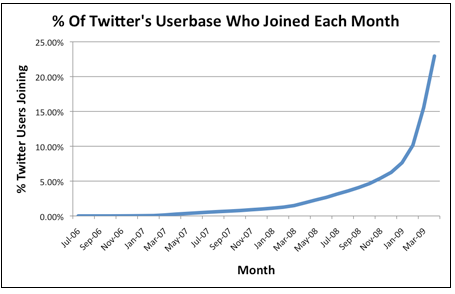 It’s clear that Twitter is on to something big. Most of Twitter’s user base has joined within the last three months, and 25 percent joined in April alone. This disparity is only going to increase as Twitter becomes a site filled with new users.

Is this growth, coming in at 17 million users last month according to comScore, actually unsustainable, as the Nielsen report concludes? It’s too early to tell, but the first-month drop-off is not a sign that Twitter is doing something wrong.

If I were Twitter I’d just be happy to know that reports about my impending failure could generate so much press — talk about customer loyalty!

Jesse Farmer is a computer programmer and entrepreneur living in Palo Alto, CA.  He writes about social networks, viral marketing, and analytics at 20bits.com.