VentureBeat readers may be wondering why more than half our staff is obsessively covering Apple’s Worldwide Developer conference today. Sure, Apple is a publicly-traded company while we cover startups and innovation. But Apple, especially through its iPhone developer platform, has put itself at the center of some of the most exciting changes in the tech industry. Today, it did a lot more of that.

Strategically, the news today shows that Apple is driving down prices for its Macbook laptop computer line and its phone in a bid to go more mainstream, while fleshing out software features to make its products more valuable to people. More users and more feature possibilities mean that Apple’s ecosystem will become more and more attractive to third-party developers.

The new iPhone 3G S offers faster performance and network speed for games. That’s important because games are more than 20 percent of all iPhone apps. 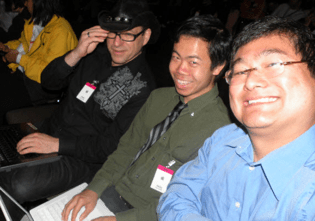 New iPhone software: Apple pre-announced a lot of these features in March, but they look as awesome today as they sounded then. Highlights include multimedia messaging and tethering — unfortunately for US iPhone users, exclusive carrier AT&T won’t be able to support either yet.

Confused by the new iPhone pricing scheme? You’re not alone.

iPorn startup grabs attention at WWDC. Just gaze at the picture for a while.

To see how the keynote went down, check out our liveblogging FriendFeed room, complete with lots of great comments from our readers on Friendfeed.

[Pictured left to right: a person wearing a yellow windbreaker or something, Paul Boutin, Anthony Ha and Dean Takahashi]