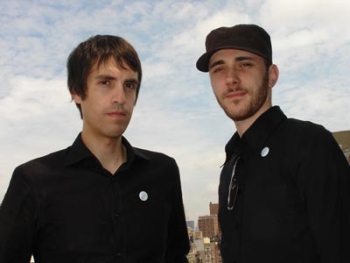 Peter Rojas (left) and Ryan Block made Engadget one of the top two consumer-electronics fan sites on the Internet. After leaving Engadget separately, the pair are working together again on a new site called gdgt.

Engadget was the first website to liveblog Apple keynote events in a rapid-fire style that gave readers a you-are-there experience. (I was the original typist for these Steve-blogging stunts, so I’m biased.)

Gdgt hasn’t officially launched yet, but that didn’t stop Rojas and Block from liveblogging Monday’s keynote event. Rackspace’s cloud-computing service proved itself by delivering nearly five million pageviews in less than two hours. (In the old days, Engadget’s Apple coverage reliably broke parent company AOL’s servers, as millions of page requests came in at once.) That kind of traffic proves gadget fanboys have a lot more brand loyalty to Rojas and Block then they do to cellphone makers. The question isn’t whether the Internet needs another gadget blog. It’s whether the rest of them will be able to hang onto their readers when the original gadget gangstas come back.