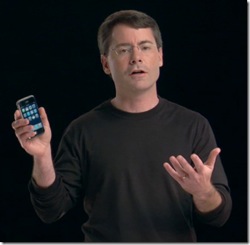 Bob Borchers, who led Apple‘s marketing efforts for the iPod and then the iPhone over the past five years (and even appeared in iPhone videos), recently made the leap to venture capital, becoming a general partner at Opus Capital. Yesterday, I had a chance to talk to Borchers and hear more about the startups he wants to invest in.

Of course, I had to ask him about the move to Opus, since the shift from being a marketing director to VC isn’t that intuitive. But Borchers didn’t share any juicy stories about an acrimonious split — instead, he said that after helping to build an ecosystem of products around the iPod, then seeing an ecosystem of applications and developers start to explode around the iPhone, he was so excited about the opportunities in mobile that he wanted to start investing.

So what are these opportunities? Borchers said many of them lie “between mobile and a few industries.” As an example, he pointed to demonstrations at recent Apple events showing off the capabilities of the iPhone in the medical industry, like accessing real-time patient monitoring data on the phone so a doctor can check in on patients even when they’re not in the room, and a glucose monitor that delivers readings to the iPhone.

“Having a single great application is probably a necessary condition, but it’s not a sufficient condition,” he added — in other words, startups have to have a plan to build a company and a line of products, otherwise they’re one-hit wonders.

Not that you have to be application-focused, either. There’s also a big opportunity for “horizontal plays” that support the applications, he said.

“I think there are opportunities in the services space as well as the hardware space as well as the application space,” Borchers said. “If you look at push notification on the iPhone, there’s this huge clamor, a huge intent to use it by all of these thousands of developers. But very few have grasped the fact that you have to have a server … Your backend has to be able to think about that.”

(Hmm, sounds like those Push.io guys who offer infrastructure and backend services for iPhone app developers are on to something.)

Given Borchers’ background, does that mean he’s going to be all about the iPhone in his investments? Not exactly, he said — after all, there’s a huge smartphone market beyond the iPhone.

“The bigger opportunities are those that can go across these platforms,” he said. “At the same time, I feel like if you don’t have a strategy that addresses the iPhone and some of these other halo devices, you’ll have a hard time getting the visibility in the marketplace you want to have.”