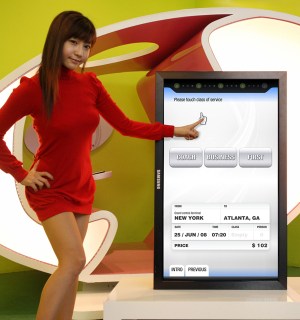 Digitimes reports a rumor that some netbook makers will produce low-cost computers with touchscreens that replace the mouse and trackpad. The move will free up space for a bigger keyboard.

At least some netbook makers, Digitimes reports, believe that a netbook with a touchscreen and bigger keys will sell better than one with a trackpad plunked down in the middle of a keyboard whose keys have been shrunk to make room.

It’s important to note, though, that the netbook makers aren’t planning to throw away the keyboard and build another tablet PC. Apple’s onscreen keyboard drops jaws, but as a means of typing in anything longer than a tweet, it’s exasperating. New York Times reviewer David Pogue praised the Palm Pre’s new micro-sized keyboard as “faster and less frustrating than typing on glass,” by which he meant typing on an iPhone. 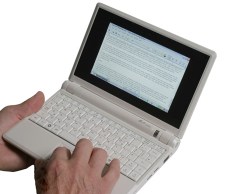 That’s why instead of using touchscreens to replace the keyboard entirely, netbook makers plan to start by replacing only the touchpad and possibly the mouse buttons. What will they look like? They’ll look like the Eee PC pictured here, but without the trackpad hidden beneath the model’s hands. See all the space that could go away? In another two years, the only major difference between a smartphone and a netbook may be the size of their screens and keyboards.