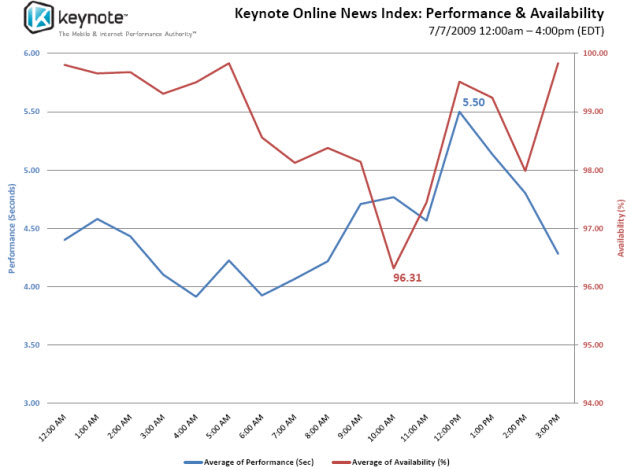 The web performed much better than in past big events during the live video streaming of Michael Jackson’s memorial service today, according to web measurement firm Keynote Systems.

The company’s index of 40 web sites was unaffected as a whole by the large amount of traffic associated with millions of online viewers of Jackson’s memorial. That’s a big contrast to the inauguration of President Obama, when Keynote’s index slowed by more than 60 percent at the start of the event.

But news sites that provided up-to-the-second live video coverage of the event did see delays. On average, it took about 20 percent longer to load home pages. The average load time rose from 4.25 seconds to 5.5 seconds, while some sites in the index took as long as 18 seconds to load. Average web site availability, or the ability to download all of the page content on a given site in less than 60 seconds, dropped slightly from 100 percent to 96 percent. A few sites dropped under 80 percent.