The team behind a new social networking site called Blackbox Republic is coming out of stealth mode today. They don’t have much to show off yet, since the the social network won’t launch until this fall, but the Portland, Ore., company has $1 million in seed funding, a strong founding team, and above all a cool concept: It wants to build a site where members of the sex positive community can gather.

So, uh, does that mean it’s going to be a social network for sex? Yes and no. Co-founder and Vice President of Community Relations April Donato says that for Blackbox Republic, “sex positive” means “sexuality isn’t an issue,” so the site should be a place where one of the focal points is sex but that isn’t about sex exclusively. One of the company mottos is, “Sex will happen,” i.e., people will have sex as a result of connections made on the site, but that’s not the only point. (Donato also blogs about the sex positive movement.)

Sam Lawrence, the other co-founder and Blackbox Republic’s chief executive, says there are four key components: First, Blackbox Republic has to be a safe space, where people can feel confident that they won’t constantly run into creeps. To ensure that happens, the site will have strong privacy controls, and most of it will be locked off to new members until an existing member vouches for them. Second, there will be an e-commerce component, where people can buy each other gifts; Lawrence promises that gifts will be more valuable and incorporated much more organically than on other social networks. Third, the site will encourage users to “get out from behind your computer,” allowing them to plan get-togethers and coordinate via Blackbox’s mobile site. Finally, it will incorporate event planning and event promotion. 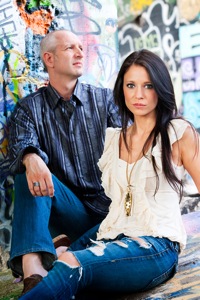 Lawrence, who used to be the chief marketing officer at Jive Software (to see him talk about something a bit less sexy, you can watch this video of his presentation on Productivity 2.0 at the DEMO conference), says Blackbox Republic exists at the intersection of three kinds of sites: Social networks like Facebook, dating sites like Match.com, and e-commerce sites like Amazon.com. But none of those are a good fit for the sex-positive community, he says, because Facebook makes it hard to separate your connections into different groups, so (for example) a Facebook friend from work would see photos of Lawrence dressed in a tutu at the Burning Man event; dating sites are all about finding someone hot and setting up dates with them, rather than creating meaningful interactions on the site; and e-commerce sites are too separate from the rest of your interactions on the web.

As for making money, the site will charge a $25 a month for membership and share the revenue from gifting. In the future, Lawrence says Blackbox Republic plans to license its technology to other companies that want to build community sites, somewhat akin to social network builder Ning.

“You could take these ideas and you could apply them to sports, or to any other community,” he says.