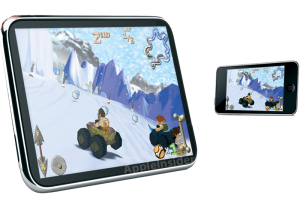 The rumor that Apple has a tablet computer in the works is one of the oldest running tales told by gossips who claim to have secret knowledge of the hypothetical gadget. But AppleInsider now claims that “people well-respected by AppleInsider for their striking accuracy in Apple’s internal affairs” are sure that a tablet product is being readied for launch in the first quarter of 2010. In a post this morning, AppleInsider writer Kasper Jade explained why they believe it now:

“AppleInsider has observed silently as the project was reset at least a half-dozen times over the past 24 months. Each time, development was frozen and key aspects of the device rethought, retooled and repositioned.

However, the past six months have reportedly seen the critical pieces fall into place. Jobs, who’s been overseeing the project from his home, office and hospital beds, has finally achieved that much-sought aura of satisfaction. He’s since cemented the device in the company’s 2010 roadmap, where it’s being positioned for a first quarter launch.”

The new product has been described by rumormongers as “an oversized iPod Touch.” Apple’s device will almost certainly use the same touchscreen technology as the iPhone. The desirability of a tablet computer has been boosted by the runaway success of the keyboard-less iPhone. Compared to scrawling with a stylus or thumbing a tiny keyboard, tapping at a touchscreen keyboard excites iPhone users, even if thumb-typing on a BlackBerry is faster. The iPhone has made touchscreens cool, opening the door for other devices.

The news turns up the heat on a standalone product, the CrunchPad, being developed by TechCrunch founder Mike Arrington through a 14-person company in Singapore. Arrington has said that the CrunchPad now consumes 75 percent of his time. He’s proven deft at beating other journalists at getting a story out. Can he beat Apple to a product launch? This will be fun to watch.