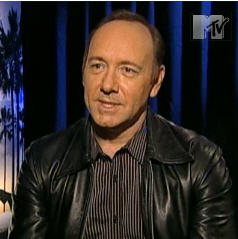 “The Social Network” is Hollywood’s adaptation of Ben Mezrich’s book about the founding of Facebook, The Accidental Billionaires. The film has turned into a pile-on of Tinseltown power players. West Wing creator Aaron Sorkin wrote the script. Spacey will produce. The film’s director hasn’t been named yet, but Fight Club director David Fincher is said to have dibs on the gig.

Mezrich’s book, however, is a disappointment. I trashed it on VentureBeat and also in the Wall Street Journal, so I’m feeling sorry for the author now. I’ll give him this: He went down swinging. But Facebook’s central character, Mark Zuckerberg, refused to speak to Mezrich for the book. Almost certainly as a result, Mezrich was unable to concoct a convincing, three-dimensional Mark Zuckerberg character and an engaging tale of Facebook’s creation.

What you really want to know is: Who’ll play Zuckerberg in the movie? Shia LaBeouf, Michael Cera, and Paul Rust have all been rumored. But Spacey explains in the clip below that until they have the director on board to oversee casting, he would be wrong to speculate.