Real-time: It’s a hot new buzzword trying describe the potential that immediately available data can have in our day-to-day lives. But what potential? When I’ve tried to think about how real-time data services are going to transform my daily routine, I haven’t been too successful.

Until I found a couple Twitter accounts a few weeks ago, @caltrain and @bikecar, that have been helping me enjoy a better commute ever since. My main method of getting to Silicon Valley is a combination of bicycle and the local passenger rail service, the Caltrain. The rail line runs between San Francisco and San Jose, so I can just bring my bike on board, get off and bike to meetings or events in key local suburbs like Mountain View, Palo Alto and San Mateo.

That is, except when the train doesn’t have enough room for bikes. There’s only one or two cars on each train with room for bikes, and things can get crowded, especially during rush hour. I’ve missed more than one meeting because a train conductor has turned me away at the bike car door.

Enter @bikecar. It’s a group Twitter account created by San Francisco-based Ravi Pina, who bikes and takes the train down to his network engineering job at voice technology company Tellme in Mountain View. Essentially, the account lets any rider share their immediate observations about each train and the space for bikes on it. The result is a steady stream of real-time or almost real-time updates that affect when and how I will be able to get around for my job — information that I can’t otherwise get. From the point that another rider tweets about bike space, its only a matter of seconds or a few minutes until I can see it, and know whether or not the train headed towards me is going to have room for my bike. That means I can call ahead to delay a meeting or make other arrangements sooner than I’d be able to otherwise.

Note: The tweets are written in a sort of short-hand, as you can see from the screenshots. For example, “SB” means southbound from San Francisco to San Jose and “old” cars mean the larger, noisier, grimier and older model of Caltrain trains. 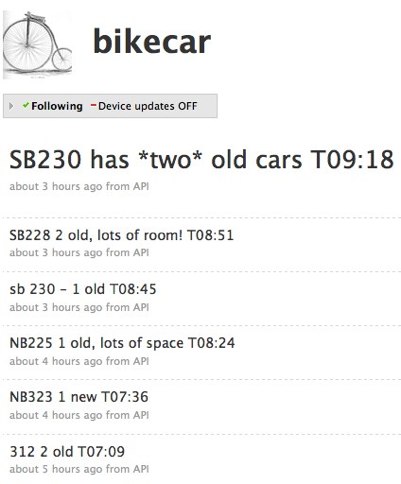 Here’s how the account gets its data, for my fellow bicycle-train commuters who want to help out. You email Pina (more here), he gives you a unique email for the bike car account. You send emails (from your phone) to the account, including your desired 140-character tweet within the subject line. Then the system automatically posts your message as a tweet on the @bikecar account. Sure, its a cobbled-together, volunteer-run honor system in lieu of information you might hope that Caltrain would itself provide. Perhaps one day Caltrain will ask its conductors to be taking constant counts of bike car space, have them send that data in to some switchboard, and post it on digital displays at each Caltrain stop and on its web site. But Caltrain seems to have chronic budget problems despite its popularity, and A free but valuable service like this has yet to emerge.

The more general service, @caltrain, lets anyone (who gets a key from Pina) share when trains are late. Although it has more followers — currently 2014 versus @bikecar’s 309 — it is less useful for me because the train is almost always on time these days.

A Silicon Valley geek who has been on Twitter since its early days, Pina first got the idea for the service in the fall of 2007, when Caltrain was having an especially “bad time with mechanical issues and fatalities” and when “I was getting bumped from the bike car repeatedly.” He built the service himself, uses open source software including the Postfix email server and perl programming language, running everything off of his own server for free. Although still small, the services have been spreading by word-of-mouth between local train and bicycle users.

Pina’s service may not ever be a business, but rather a labor of love and necessity that wins him the appreciation of Caltrain’s bikers. And so it may be with many other services that incorporate real-time data. What they are doing, though, is making little bits of the world run more efficiently. Personally, I’m getting to more meetings on time. I’m getting a productivity gain. And certainly others can find ways to benefit from the concept. If there’s a massive train delay on evening, perhaps a coffee shop near a Caltrain station will know it should stay open an extra hour or two for the stranded train passengers. But the larger vision for Twitter and its ecosystem is that thousands of pieces of data — like bike cars on trains, taxis, ambulances and everything else in a metropolitan area — being mapped out. In fact, other groups, like DIY City are using Twitter to try to do the same thing with real-time car traffic (good thing there are no bike traffic jams, huh?). 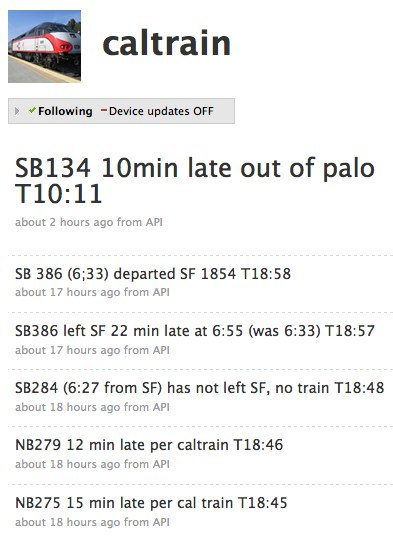 As Twitter founder Jack Dorsey explained in a recent interview, his service is about letting normal people share information about the world:

Twitter has been my life’s work in many senses. It started with a fascination with cities and how they work, and what’s going on in them right now. That led me to the only thing that was tractable in discovering that, which was bicycle messengers and truck couriers roaming about, delivering packages.

That allowed me to create this visualization — to create software that allowed me to see how this was all moving in a city. Then we started adding in the next element, which are taxi cabs. Now we have another entity roaming about the metropolis, reporting where it is and what work it has, going over GPS and CB radio or cellphone. And then you get to the emergency services: ambulances, firetrucks and police — and suddenly you have have this very rich sense of what’s happening right now in the city.

And that’s where Twitter came in. What really brought me to that conclusion …

… was instant messenger. This aspect where you can just locate your buddy list and at a glance locate what your friends are up to, or what they say they’re up to. I found the same parallels in dispatch — here’s a bunch of ambulances and couriers reporting where they are, and here’s my friends. Now, the problem with IM is that you’re bound to the computer, so it really limited the interestingness of the messages.

Twitter is still figuring out its revenue model. But so far, it appears to be trying to help businesses find and better serve current and potential customers on it service. Surely, with the central role that it is playing in day-to-day communication for random little groups of people (like bike-train commuters), its revenue is not a matter of if but when.