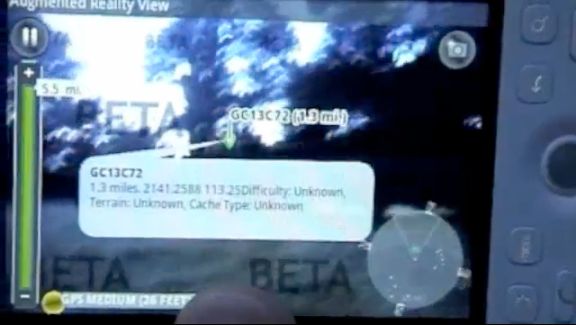 Geocaching, an outdoor game where players use GPS on mobile devices to leave or track down hidden packages, may be about to get a bit easier.

Instead of relying on GPS coordinates and written clues to find packages, players can see visual markers on an Android phone’s viewfinder thanks to an augmented reality project by U.K.-based developer Nicholas Tollervey. It’s one of augmented reality’s newest uses after two companies released application programming interfaces last month to encourage experimentation. Augmented reality is a young field that lets you overlay information or graphics in a viewfinder. It was considered more of an academic pursuit until smartphones opened the door to potential everyday use.

Tollervey took data from GeoBeagle, a free, open-source application for Google’s Android platform and marked it up in the Wikitude browser. Wikitude is an augmented reality browser from Austrian company Mobilizy. When it launched last year, it was a travel guide that let you hold up your Android phone’s viewfinder and see Wikipedia articles tagged to places around you. (See examples here.)

Since then, the company and its Dutch rival, SPRXMobile, have opened up APIs and are competing to lure independent developers to build apps. So the space could be set to balloon with lots of interesting commercial applications. Think restaurant recommendations, real estate listings, or search queries that could be launched directly from your phone’s viewfinder.