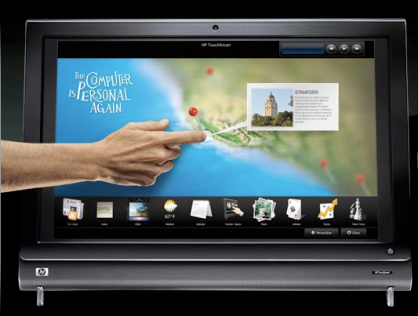 [This piece, written by Al Monro, CEO at touch-screen designer NextWindow, is the third in a series of posts about cutting-edge areas of innovation. The series is sponsored by Microsoft. Microsoft authors will participate, as will other outside experts.]

After many years in the making, it looks like touch technology on the desktop is finally taking off. Dell and Hewlett-Packard already have delivered touch-enabled PCs to market, and these products have been very well received. According to analyst firm DisplaySearch, just over one million desktop PCs/monitors were sold in 2008 with touch, and this number is projected to grow to more than 2.4 million in 2009. And a recent article in Computerworld notes that several other major computer vendors including Lenovo, Acer and Sony will soon launch their own touch PCs. In the meantime, Microsoft is preparing to launch Windows 7, the first-ever operating system with built-in multi-touch functionality. The combination of these efforts has led DisplaySearch to predict that the global touch screen PC market will reach $9 billion by 2015.

The actual technology used to convert a traditional monitor to a touch screen monitor is a key variable driving consumer adoption of touch-enabled PCs. Of the million-plus touch PCs and monitors sold last year, roughly three-quarters of them used a technology known as “resistive” touch. It is a low-cost solution found in many touch screens, including hand-held computers, PDAs, consumer electronics, and point-of-sale-applications. But limitations can include excessive glare and/or reduced image quality. Resistive screens also are susceptible to vandalism, in that touches will not register if the resistive sheet is cut or scratched.

Meanwhile “optical” touch screen technology, which last year was used in the remaining 25% of touch PCs and monitors sold, is increasingly popular with PC makers. (Disclosure: My company, NextWindow designs optical touch monitors.) HP and Dell are both using optical in their touch PCs and the technology has many consumer-friendly advantages. In particular, optical touch technology provides the best clarity of image and the lowest cost. Optical is also ideal for computer screens ranging in size from 12” – 120”, where as competing technologies such as “projected capacitive” (used in the iPhone, for example) are primarily designed for smaller devices. Just as importantly, optical delivers the kind of physical tool-like flexibility that consumers enjoy. You can interact with optical touch screen applications using your fingers, a hard or soft stylus, and even a paint brush. In fact, only optical and infrared technologies let users interact with an application without touching the screen at all — this is known in the industry as “zero activation pressure” required to make commands. In addition, scratches on the touch surface will not affect the touch screen operation.

Until now the touch-enabled software applications market has been stuck in a very chicken-or-egg situation. Software developers were reluctant to build touch applications due to the dearth of touch-enabled PCs. Likewise, PC makers were hesitant to deliver touch-enabled PCs because there were no touch applications. But now that touch PCs and Windows 7 are hitting the market, the universe of software developers can begin building applications to run on these systems. It’s easy to imagine existing applications like Microsoft Paint, Adobe Acrobat, Bing Maps and Google Earth will be much more enjoyable to use with touch: consider channeling your inner Picasso by using a paint brush to sweep and swipe the computer screen.

It’s even more fun to ponder what as-yet-unknown developers will do with touch. For instance, how about a grocery market app that lets users stroll down aisles “flicking” produce and other items into shopping carts with the swipe of a finger, or spinning product boxes around to view ingredients. Or an app from a cosmetics company that lets users project their face on to the screen and then use their fingers to brush, dab or blend make-up. The truth is, we really don’t know what’s possible with touch — and that’s a big part of what makes this market so exciting.

Be sure to see the previous articles in this series:
How phones emerged as main computing devices, and why user interface will improve
Put your finger on it: The future of interactive technology