About 10 million Americans were victims of identity theft last year, about 22 percent more than the year before. Those are always good numbers to trot out when you’re introducing a new security software suite.

Check Point’s Zone Alarm division is refreshing its Zone Alarm Extreme Security Suite today. The software has more than a dozen components aimed at protecting users from viruses, identity theft, spyware and all sorts of other malware. The changes to this year’s software reflect the evolving nature of threats. 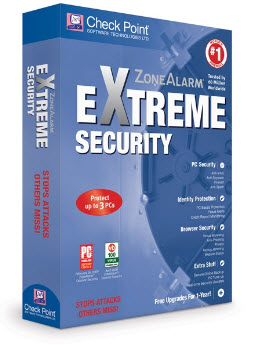 With so many different things to protect against, security software companies are moving to layered defenses. Some of them block threats automatically, while some have to detect patterns of behavior and then act based on the likelihood of a threat or a false alarm. The basic antivirus software protects your email against known threats such as Conficker. Firewalls block malicious programs while allowing authorized communications.

But that’s not enough. While emails once delivered most of the threats, now you can get infections just by going to the wrong web sites. A virus dubbed Gumblar appeared in February that can attach itself to Adobe PDF files and infect a machine upon being downloaded. You don’t have to click on an email or do anything at all.

ZoneAlarm has virtualization software to deal with such attacks. It can create an independent partition within your computer’s hard drive and place suspicious files in it. If a download is not authorized by a user and happens automatically, ZoneAlarm’s Force Field software places it in a partition where it can be isolated. ZoneAlarm has also added “advanced download protection.” That screens user-approved downloads and isolates them. It checks against its own records and then offers advice on whether to warn the user or not.

If some bad stuff gets through, ZoneAlarm has backup protection. It can, for instance, encrypt the data being typed on your keyboard and prevent unauthorized programs from getting access to your keystrokes. That stops keyloggers, or software that records what you type on a computer in the hopes of scoring your passwords.

This year’s software also includes a way to encrypt a hard disk drive. That feature is included this year because so many more laptops are being bought now, and laptops are more vulnerable to theft. If you’ve encrypted your drive, the risk of losing valuable data is lower, says John Gable, director of product management at ZoneAlarm in Redwood City, Calif. And if you forget your password for your encrypted drive, ZoneAlarm has a service you can call to retrieve the password, after you pass authentication tests.

For the antivirus protection, ZoneAlarm’s Extreme Security suite relies on Kaspersky Lab‘s antivirus technology. That software scans 85 percent faster than what ZoneAlarm offered before. The suite — which works for Windows Vista, XP and the upcoming Windows 7 operating systems — sells for $69.95. The stand-alone drive encryption software is $29.95.

ZoneAlarm competes with rivals such as Symantec and McAfee, which offer suites of their own, but Gable maintains ZoneAlarm can block attacks, such as Gumblar, that others don’t. ZoneAlarm is also the only one with features such as keystroke encryption, hard drive encryption, and encryption password recovery.