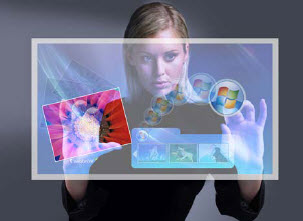 Display technologies are constantly in flux. Since Apple introduced the multitouch display for the iPhone a couple of years ago, touchscreens have become all the rage in the computer industry. Al Monro of NextWindow wrote about how Windows 7’s support for desktop touchscreens will make them not just cool, but mainstream.

Now we’re hearing from more startups that have been working for some time on solving the tough problems of making displays bright but low-power and making user interfaces much simpler and easier to control.

Touchscreens are likely to become even more  mainstream thanks to the touch support built into Microsoft’s Windows 7 operating system debuting on Oct. 22. Touchscreen startups and new kinds of displays are coming out in force, if the speeches at DisplaySearch‘s Emerging Display Technologies conference this week are anything to go by. The big lure: touchscreen module revenues are growing from $3.6 billion in 2008 to $9 billion in 2015. 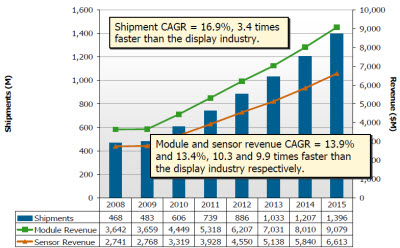 The new display technologies include several different ways to create touch screens, low-power electronic paper displays, and pico projectors that can put images on a wall. Altogether, there are a dozen different types of touch screens, largely because no technology is perfect, said Jennifer Colegrove, director of display technology at DisplaySearch. The needs vary by application. Game devices require fast touchscreens that can respond to touch within 10 milliseconds or so, while typing applications work fine with 50 millisecond delay, said Guillaume Largillier, founder of Stantum, maker of digital resistive touchscreens. [chart: DisplaySearch]

In the near term, companies such as Israel’s N-trig are benefiting from the Windows 7 launch. Computer makers such as Dell and Hewlett-Packard have launched displays with the company’s pen and multitouch technology. The screens are popular with women using the touchscreen computers in the living room or kitchen, since they’re designed with women as the main users and are more accessible than pure keyboard/mouse computers. But the market still needs more compelling applications. Those are starting to appear. Natural User Interface created a Bugs game, where two people can touch the screen at once and draw circles around moving bugs.

N-trig has created gestures that let you control things with three or four fingers. Next year, it will have 10-finger multitouch available. The company raised $24 million last year from investors that included Microsoft. It now employs 120 people. Lenny Engelhardt, vice president of business development, said more N-trig based computers with touchscreens will be arriving with the launch of Windows 7 on Oct. 22.

One of the most popular types is projected capacitive, used in the iPhone, Palm Pre, and many touch-enabled smartphones. You can use your finger or a conductive pen to interact with it. You can’t use gloves since it requires an electrical coupling of your finger and the screen. Resistive touchscreens are also popular, but they aren’t as bright, and they need a more forceful touch, since you’re pushing two different layers together to make an electrical connection. 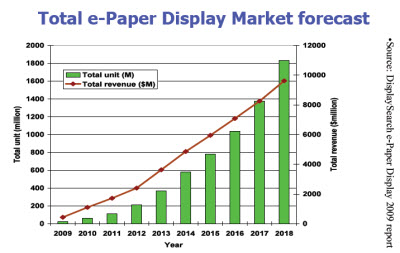 The e-book and e-paper displays, such as the one used in the Amazon Kindle e-book reader, are gaining momentum and have the added requirement of having to be readable in direct sunlight. Display maker AUO estimates that e-book display revenues will grow from $276 million in 2009 to $1.1 billion in 2012. It estimates that the more flexible e-paper displays will grow at a 49 percent compound annual growth rate from 2009 to 2018.

Colegrove noted that color e-paper displays are not likely to achieve high volumes until after 2011. But Liquavista, a startup working on a electrowetting display technology, contends it can do color e-book screens in the not-so-distant future. The technology takes advantage of what happens when you apply an electrical charge to the surface tension atop liquids. 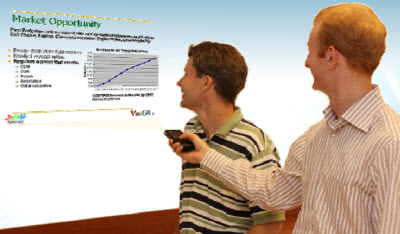 Meanwhile, conglomerate 3M and startup Syndiant are working on tiny projectors that can be built into cell phones. These pico projectors can display large images on walls, so you can play images and videos stored on your cell phone on what appears to be a big screen. The first round of these projectors were a disappointment for consumers, but the technology is getting better. Syndiant closed a $10.9 million round in August.

Startups typically have a long gestation. Stantum started working on its technology in 2002 (when it was named JazzMutant). It launched its first product in 2005 and scored some big licensees in 2008. It is going into large-scale production later this year.

Some of the displays require extremely complex technologies, while others are born by observing nature. Qualcomm’s Mirasol displays (right) use the same optical effects as butterfly wings, which are extremely colorful even in bright daylight thanks to the way they capture and reflect light. Qualcomm built MEMS (micro-electro mechanical system) chips to essentially duplicate that effect. Without using a lot of power, these displays are bright in the sun. Qualcomm is collaborating with LG Electronics on the displays.

Touchscreens are also giving rise to ecosystems with related companies. Senseg, for instance, has created a non-mechanical force feedback technology that lets you feel touch feedback when you press a touchscreen with your finger. The lack of feedback is a big drawback that touchscreens have compared to keyboards. Ville Makinen, chief executive officer and founder of Senseg, said you can actually type faster if you have tactile feedback. His company’s E-Sense feedback system lets you feel feedback through electrostatic pressure.