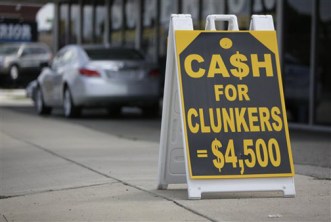 A recent report from digital measurement firm comScore shows that the U.S. government’s Cash for Clunkers program — the initiative allowing drivers to turn in their old gas-guzzlers for money toward fuel-efficient vehicles — caused cleantech web traffic to jump 15 percent in the month of July. The automotive industry also got a boost.

All told, 17.5 million people visited web sites related to Cash for Clunkers — including Yahoo! Green (its cleantech news property, with 1.9 million visitors), NaturalPath Media (the advertising network for green lifestyle publishers and marketers, with 2.1 million visitors), and ECOMII (a portal for green topics, with 1 million).

Automotive, especially car maker, web sites also saw a 14 percent boost in traffic to 27.1 million users — an annual high for the sector. Not surprisingly, General Motors got the bulk of it (a spike of 20 percent to 7 million viewers). For most people, GM’s Chevy Volt is the most mainstream electric car option coming out in the near future (slated for next year). Comparatively, even Tesla Motors is niche and still prohibitively expensive for the mass market. Toyota, home of the popular hybrid Prius, took the No. 2 spot (up an incredible 46 percent to 6.9 million users). Ford and Honda saw their traffic go up 12 percent and 23 percent, respectively.

As for the Cash for Clunkers program itself — now that it’s over — certain problems have been cropping up as applications are processed. So far, the government has only been able to get through about 20 percent of them, and more than anticipated are being rejected. When applications are returned, the dealers that sold the new fuel-efficient cars lose the $4,500 rebate they gave to the car buyers, and some are actually asking customers to pay them back — even though the program guidelines explicitly prohibit that. Dealers in violation of this rule should be reported at (866) CAR-7891, Cash for Clunkers administrators say. Considering the volume of rejections so far, its estimated that between 25,000 and 50,000 apps total will be returned to dealers, which could become unfairly expensive for them.

But, overall, the program says it was a major success, with 700,000 new cars sold — giving the desired infusion to the auto industry despite the tight economy. That said, it should be several more months before the full impact of Cash for Clunkers is felt.