Hara, maker of environmental and energy management software, has raised $14 million in a second round of funding only three months after its launch. Backed by Kleiner Perkins Caufield & Byers, the company is unique in its ability to track not only energy consumption or carbon output, but what it dubs “organizational metabolism.” It looks at all the resources that go into its clients’ supply chains — including water — how they are used, and the waste products that are produced.

With government policies enforcing strict carbon and energy reporting and renewable energy mandates pending in the Environmental Protection Agency, SEC and Congress, software makers like Hara are already seeing a lift in demand. But its CEO, Amit Chatterjee, says the real focus is on creating financial opportunities for its clients, in both the private and public sector. Greening supply chains has started giving major companies a competitive and marketing advantage. Just look at Wal-Mart’s decision to tag its products with their individual footprints so that consumers can make more informed decisions. On top of that, Hara’s software pinpoints the areas where behavior can be changed and money can be saved. The company is unique in its focus on business value and returns, arguing that regulatory compliance — the emphasis of carbon accounting firms and other tracking software — won’t be enough to spur real change.

“When you look at the Waxman-Markey bill [the climate bill pending in the Senate that would create a carbon trading system], or whatever form the regulation will come in, it is going to hit the heavy energy consumer sector like oil and gas the hardest, and we have customers in a broader range of industries,” says Hara chief marketing officer Chris Farinacci. “Our customers are looking for a more holistic approach.”

Hara’s product relies on modules that draw data from the meters and equipment that companies used to have to read manually. This data is transmitted to a centralized dashboard that slices and dices it into actionable information. Back in June, when it raised its first $6 million round from Kleiner, it listed the Coca-Cola company and the City of Palo Alto as two of 12 clients. Now, it says it has at least half a dozen more, including data networking provider Brocade, defense and aerospace contractor Aerojet and the City of San Jose. Chatterjee says its corporate and municipal clients alike are already changing their practices and processes based on data delivered via Hara’s software. 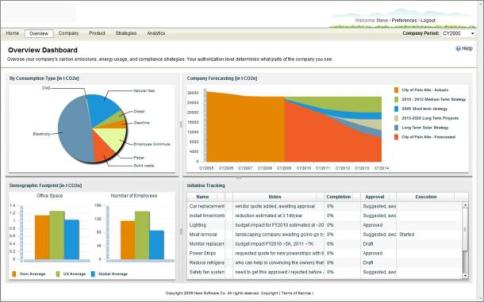 The recent round of funding was led by JAFCO Ventures, which should give the company a nice entree into the Asian markets, Chatterjee says. Nth Power and Kleiner Perkins also participated, boosting Hara’s total capital to $20 million. Considering that it was able to raise a second round so quickly — before it had burned through even half of its $6 million — it seems to have defied the cleantech investment drought. But it wasn’t as easy as it looked.

“The opportunity can be great but the risk mitigation going on in the venture community is creating very high standards,” Chatterjee says. “Investors like the story that climate change can be address through operational efficiency. You need to be able to tie the environment to cost savings. Organizations still need to deliver shareholder value.”