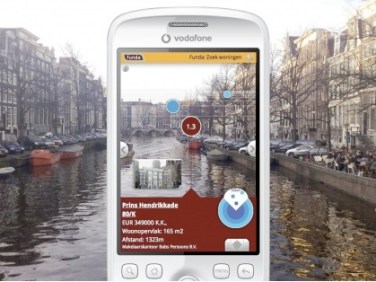 Augmented Reality — the ability to superimpose data and information over a view of the real world — is arguably hot these days, and there’s no scarcity of articles and blogs on the space and AR apps. VentureBeat first reviewed AR apps two months ago. As more time has passed I decided to take a deeper look at the technology, business models and utility behind the startups to separate hype from reality. To do so I talked to AR expert Robert Rice and interviewed the startups in the space in order to come up with a ranking of augmented reality startups (see chart below).

The ranking I came up with is by no means definitive, but rather meant to provoke discussion and thoughts. Rather than coming up with absolute numbers, I divided startups into three tiers. Tier 1 companies stand out in technology, business model, and utility of their apps.

A couple of startups in Tier 2 (Mobilizy and Layar) have had quite a bit of momentum and buzz, however I found that their technology is simple, their business model unproven, and their utility questionable with less than accurate GPS systems and hardware. However, the future of AR apps is going to get more mobile, and AR will not be just used by businesses but by end consumers as well. That is where several start ups in Tier 2 actually have an edge over those in Tier 1.

Moreover, Tier 1 companies (which are all business-to-business, more on why that’s the case below) do not really compete with those in Tier 2 (which are business-to-consumer, except for Zugara, which is essentially a business-to-business company), although this might change. As hardware and technology improves, and wearable displays become more of a reality, we will see increased overlap between several of these players and that is when I think companies such as Layar and Mobilizy will be well positioned to take advantage of partnerships.

Most of the apps I researched are targeting one of the four industry verticals: retail, industrial, mobile, and online. It will be interesting to see how much need each of these markets show for augmented reality innovation. Success of a company is rarely based on technology alone. Generating buzz and striking partnerships to develop a strong ecosystem is equally if not more important. 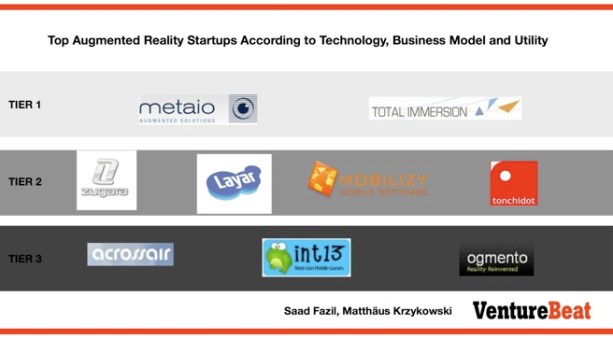 Here are some important criteria to look at when assessing the viability of an AR startup:

AR in its primitive form requires markers (watch this demo for an example of printed markers) of some kind or a symbol to generate the graphic overlay on reality. Though necessary in some cases, this not only makes an app harder to use, it also limits the usage and mobility of the app. Also, some apps would require a user to download proprietary (or additional — in case of the demo above) software, which again is necessary for some powerful use cases, but limits the universality of an app. Some of the easier apps can be developed using Flash, which is readily available and free to download. In a nutshell, what makes an app very powerful also makes it less universally available. However, as technology advances and AR becomes more mainstream, I expect that more universal tools (such as Flash) will become powerful enough to embrace AR.

Several AR apps, like web 2.0 startups and apps, do not have a solid business model behind them except advertising (but then who could have guessed that Google — most of whose revenue comes from online ads — would be vying with Apple for market cap?). This can, in the long term, hinder the ability of a company to invest in better technologies. The companies that scored higher in this category are generally business-to-business companies that sell marketing and other solutions to industries and therefore have strong revenue streams.

No matter how cool an app might look, it has to be useful (see a fairly useless app video here) in order for it to sustain and earn money. Again, from Robert’s blog, the future of AR is mobile (though current hardware limitations can make AR on mobile seriously flawed) and depends heavily on wearable displays. MIT’s Sixth Sense would be a pretty cool and productive application if executed well and done with wearable displays (such as contact lenses, glasses etc.) instead of a projector. So is TAT’s vision of face recognition. HP’s Roku’s Reward is pretty cool in terms of entertainment, and is very mobile but without wearable displays. How far World Builder is from reality is anybody’s guess (WSJ in 1967 predicted that man will land on Mars; cities will thrive under huge, climate controlled domes; man will fly from NYC to Tokyo in under two hours; and that there will be 200,000 computers in the US by year 2000! I’m just saying).

Analysis of each company according to Technology, Business Model and Utility

Here’s an individual analysis of each company and how it rated according to the above criteria. I rated each category on a scale of 1 to 4, with 1 being the strongest and 4 being the weakest. Then I added scores in each category, and ranked companies based on their total scores. As said earlier, I prefer to place them in tiers rather than giving them absolute ranks.

Metaio is at the forefront of AR technology. They started selling their services and technology to companies but are now moving on to several online apps (such as Focus Features’ online demo for the movie “9” and Universal Home Entertainment’s online application), retail apps (Lego in store application), and mobile apps (iLiving for placing furniture, Virtual Santa, and Bunny&Me). Their superior technology sometimes requires additional plugins or software but also makes their products and services very useful to many industries, thus enabling them to make money from licensing and services that few other AR players can. However, they have limited reach in the mobile space, and this might prevent them from reaching the mass market.

Total Immersion along with Metaio is one of the strongest AR players. They also have solutions in several verticals including amusement parks, consumer products, digital marketing, events/exhibitions, museums, and retail. Check out their Magical Mirror demo under their digital marketing portfolio. They, like Metaio (though Metaio is moving into mobile quickly), are noticeably largely absent from the mobile space. I categorize them closest to Metaio.

Zugara is a privately funded startup based in Southern California. They are basically a marketing company, but they do a lot of in house product development with a goal of selling it to agencies and other business partners. Their WebCam Social Shopper is a pretty neat concept and lets one “try” clothes from the comfort of one’s home. It does have some limitations as you’re required to print markers in order for it to work accurately, and that might hinder its widespread use, but nevertheless a very interesting and useful concept. They hope to license the technology to online retailers.

Layar, a Netherlands-based startup, is perhaps getting the most buzz these days. (That screenshot up top is from Layar). They have built up a number of partnerships to add “layars” on top of GPS. For example, you can see real estate listings, tourist guides, and Brightkite updates through your phone camera. Key to their PR success so far is not their technology but partnerships they have developed. Though there are many other startups (Mobilizy, Acrosshair, Tonchidot) with similar applications, Layar so far has taken lead on the partnership front. Their business model is primarily based on advertising, although if they can become a dominant “AR browser”, you can expect them to perhaps start charging rent to develop apps on their platform. They, like other mobile AR apps, are limited by hardware and GPS.

Mobilizy is an Austrian-based privately funded startup best-known for their Wikitude World Browser and recently launched Augmented Navigation, which I find terribly dangerous to use and not very useful (for example, you are unable to see the map beyond your vision). They, along with Layar, are getting a lot of traction in the blogosphere. Their applications, although interesting, are simple mash ups of GPS and content and are not very differentiated from Layar. Their business model is primarily based on advertising, although in the future they can license their augmented navigation to GPS providers.

Tonchidot, a Japan-based startup, has developed SeakiCamera — a social tagging application. They, too, are limited by the accuracy of GPS — for example, it’s one thing to tag a large building, and another to tag a small object. However, as technology improves, we will see more applications of such type.

Acrossair, int13, and Ogmento have developed some interesting apps as well. However I think their technology, like that in Tier 2, is relatively simple, and their portfolio is limited. This puts them in a slightly lower position than those in the second tier.

I also interviewed Earthmine, although I think it would be incorrect to compare them with AR companies, as they position themselves as an AR enabler and collect 3D geospatial data for large cities.

Matthäus Krzykowski contributed to this article.