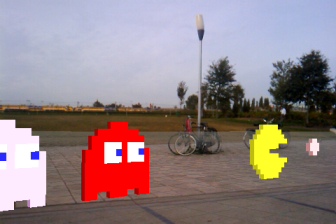 Childhood fantasies of playing Pac-Man in the real world are about to be fulfilled.

Augmented reality browser Layar will let developers stick 3-D graphics and information onto your surroundings in a way that’s viewable from a phone this November.

The nascent field of augmented reality can make a phone’s viewfinder resemble Terminator-vision, with information overlays covering the area around a user.

Up until now, Layar, from Amsterdam-based SPRXMobile, has focused on more practical applications like using augmented reality to find restaurants or real estate listings. This would represent its first serious foray into gaming and entertainment, which is a territory more well-trodden by competitors like Germany’s Metaio. (Metaio released its own browser and tagging service call Junaio last week.)

The company will use a combination of a smartphone’s accelerometer, GPS and OpenGL (which is an industry standard for developing 3-D computer graphics) to create the effect. To accommodate limited processing power on phones and data connections, Layar recommends limiting the complexity of 3-D objects to 1,000 polygons.

SPRXMobile has about 15 employees and is angel-funded.