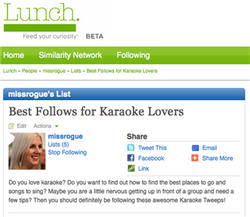 Lunch.com founder J.R. Johnson has already made his money. Now he wants his social network to foster critical thinking. “I don’t want to have people just say ‘I’m for universal health care,’ he told me on the phone this morning. “I want them to talk about why they’re for it.”

Lunch’s technology creates what the company calls similarity networks, which attempt to auto-find people like you. Lunch skews the content it shows you to be mostly from people whom it thinks are like you.

Lunch debuted in March, to lukewarm reactions from San Francisco’s Web 2.0 crowd. CNet writer Caroline McCarthy shrugged it off as “a Wikipedia for opinions.” But wait, that sounds like a good idea. Lunch’s similarity network would be a great overlay for Twitter, where I often crash into people with whom I have nothing to talk about. 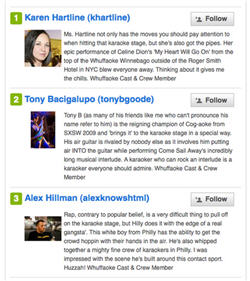 Today, Lunch is debuting what it calls Twitter Lists. They’re lists of people that users think are worth following, grouped around a theme. “You get to editorialize as to why each person is worth following,” Johnson told me over the phone. “Plus you give [other Lunch users] some expectations of what to expect from them.”

The lists feel like longer here’s-who-I’m-into collections of the sort people tweet on Fridays on Twitter. The practice, called Follow Friday, caught on organically as a way to goof off and to praise other tweeters for their valued tweets during the week. Lunch’s lists seem like a perpetual #followfriday, where favored writers get hung alongside their equals — as decided separately by each user.

Lunch sent me three lists that were built covertly before the feature was officially turned on just now.

I’m sure the ICanHazCheezburger crowd will stop by and create a bunch of goofy groups. But isn’t that an important conversation, too? They’re trying to tell us something.