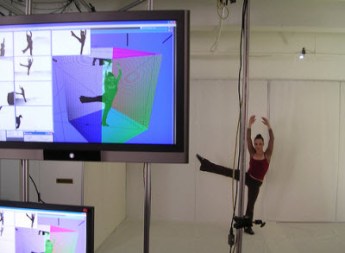 Organic Motion is announcing today it has raised $7.4 million in a second round of funding for its motion-capture technology.

The New York-based company makes a studio with a bunch of sensors that can capture the movements of a person without using a traditional motion-capture suit. The studio can track a body in motion in a highly accurate fashion and in real time, and it can be used to create an exact digital clone of a person.

Foundry Group led the $7.4 million investment. Organic Motion is also waiting to close a deal for more money with a second investor. With the new investment, the total amount of money raised by the company is nearly $10 million. Megu Capital contributed to the first round.

Organic Motion was started by Andrew Tschesnok, chief executive, who started his research in 2002. The company incorporated and raised an angel round in 2006. Now it has scored deals with a number of well-known customers, who pay $80,000 or more for the company’s motion capture equipment, which includes 10 high-speed cameras.

Customers include Intel, Disney, Sony, Six Flags, Adidas and BMC. A bunch of universities and military researchers are also using it. The University of Florida is using the technology to recreate environments for the treatment of soldiers suffering from post-traumatic stress disorder. It is also being used to train rescue personnel on how to rescue people trapped in mines.

Tschesnok said the company will use the money to expand its sales network and build on its technology. Motion capture has moved a long way over the years. Organic Motion has a deal with Swiss high-performance bike maker BMC to use motion capture to measure customers so that BMC can fit a custom bike for each person. BMC is rolling out a system in each of its 250 stores nationwide.

While other motion-capture technologies use markers such as fluorescent balls attached to body suits or light-sensitive make-up to capture motion data, Organic Motion uses no markers at all. Rather, it uses multiple cameras and software that can stitch together a 3-D view of an object to get motion accuracy down to a few millimeters.

Mova and Image Metrics can do facial capture. In the low-cost consumer product realm, where Organic Motion doesn’t play, companies such as 3DV Systems are capturing data for motion-controlled video games. But the data isn’t as accurate as Organic Motion’s. Organic Motion has 12 employees.