The microblogging service Twitter made a huge impact on bloggers in 2009, according to blog search engine Technorati‘s final installment of the State of the Blogosphere 2009 report.

About 73 percent of bloggers use Twitter, compared to about 14 percent of the general population. Bloggers say they use Twitter to promote their blogs, bring interesting links to light, and to get a feel for what people are talking about. About 52 percent of Twittering bloggers are syndicating their blog posts to Twitter. In fact, some bloggers (26 percent) spend so much time on Twitter that it has eaten into the time that they spend updating their blogs. 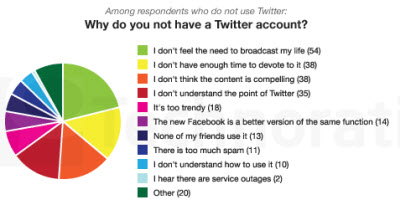 Among the bloggers who don’t use it, 35 percent say they simply don’t understand the point of it. Another 54 percent say they feel no need to blog the details of their personal lives, in spite of the popularity of personal musings. They may not be losing out on that much traffic. Technorati found that blogs with more than 100 page views a day received just 0.83 percent of their page views from Twitter referrals. This percentage stayed constant even with larger blogs.

It’s clear from the unrest in Iran that Twitter gave voice to people who would have otherwise gone unheard. About 51 percent of bloggers polled believe their influence as voices for political dissent is growing, while 39 percent believe blogs made the Iranian protests more effective.

Be sure to check out the video interview with yours truly on the second page of today’s report.