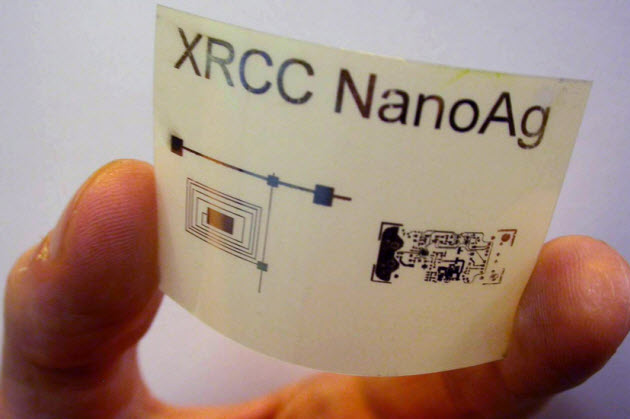 Xerox researchers have invented a kind of ink that can conduct electricity and be used to put electronic circuits on top of plastics, film, and textiles. That means in the coming years we’ll be able to wear or bend our electronics. You could even print out your electronic gadget on plastic sheets, as if you were printing a document.

Silicon chips have long been too expensive or heavy to use in devices that are extremely lightweight. The Xerox team solved this fundamental problem with lighter materials, and it plans to sell the new materials to other businesses that could make wearable electronics.

With plastics, you can unroll a sheet and then deposit electronic circuitry on top of it, building it up layer after layer. It helps to have conductive ink. That is, you need something that contains metal but that you can print with or spray on. The Xerox team created what they call a “silver bullet.” It’s a silver ink that melts at 140 degrees celsius.

Normally, metals melt at 1,000 degrees or so. But plastic itself melts at 150 degrees. So an ink laid on top of plastic can’t melt at a higher temperature or it will melt the plastic, said Paul Smith, lab manager at Xerox Research Toronto, Canada.

The applications include plastic circuits could be used to build plastic electronic book readers, such as one being built by Plastic Logic, that are flexible enough to bend and can withstand damage. They would also be very lightweight. The plastic circuits could be used to weave a computer into your clothing or make intelligent boxes for pills that could tell you whether they’ve been tampered with during shipping.

Scientists have dreamed of this for a long time, and Xerox has been researching it since 2001. Hewlett-Packard has also been working on plastic electronics for a decade. Xerox says it has now been able to fabricate cheap and lightweight components that are necessary to print circuits on plastic: a semiconductor, a conductor and a dielectric element.

The fabrication plants for these kinds of plastic chips will be cool. The circuits can be printed by printers, just like a document, without the need for an elaborate clean room as is used in current chip factories. Xerox has research samples available now and is in discussions with manufacturers who could use the plastic electronics.