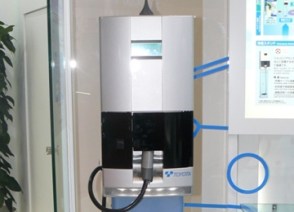 Toyota, used to being top dog in the advanced transportation business with its hybrid Prius, has pushed into a whole new area of the electric vehicle business: charging stations. Watch out, Better Place! Move over, Coulomb Technologies! Getting a major automotive name in the charging business will change the game — or will it?

Toyota isn’t simply unveiling its own iteration of electric car charging boxes (to be anchored to telephone poles and other roadside infrastructure for easy access, just like Coulomb’s) — its models are solar. Equipped with solar cells, they channel power to high-capacity batteries, which are then used to juice up vehicles’ batteries when they are on the go.

There are two possible responses to this news: 1) Wow, neat! and the requisite 2) How is solar going to generate enough power to rapidly charge vehicle batteries that right now take hours to charge via standard wall sockets?

The answer to that question remains unclear, though a demonstration station was able to supply 100 to 200 volts of electricity. It also showcased a vehicle-mounted battery charger that can convert current from AC to DC to turn 100 to 200 volts into 300 to 400 — which could be ideal for plug-in hybrid batteries.

One can assume that Toyota, with its experience and market savvy earned from the Prius, wouldn’t turn out a bum product. That said, average consumers are only beginning to catch on to the exorbitant material and energy waste that goes into the Prius, almost negating its positive environmental impact. Considering that both Nissan and Showa Shell announced development of similar systems back in August, Toyota might be feeling pressure to keep up, forced to put the cart before the horse.

There is, however, just as much of a chance that Toyota really has something here. Its concept of using mobile and local area networks to transmit users’ payment and authentication information seems solid. The same networks will be used to record charging data and transmit it to data centers so that Toyota can learn more about this consumer behavior.

So should Coulomb Technologies and Better Place, the two scrappier startups (and media darlings) in the EV charging space, be worried? Yes and no. For now, the concept of charging stations is so far away from commercial adoption — there are hardly any electric and plug-in hybrid cars on the road yet — that there’s time to grow, refine their ideas, or find an interested buyer (perhaps a large automotive company). A lucrative exit could still be in the cards.

But they shouldn’t let their defenses down completely. Considering the R&D budgets at the big car makers like Toyota and Nissan, Coulomb and Better Place risk being innovated out of a product, or left to scramble for nonexistent market share. It’s a race to see who can come up with the best, most affordable and feasible roll out plan before electric cars start gaining traction at the end of next year.

How transportation and charging stations will interact with the new electrical grid taking shape in the U.S. will be a topic at VentureBeat’s upcoming GreenBeat conference.

VentureBeat is hosting GreenBeat, the seminal executive conference on the Smart Grid, on Nov. 18-19, featuring keynotes from Nobel Prize winner Al Gore and Kleiner Perkins’ John Doerr. Get your discounted early-bird tickets before Oct. 31 at GreenBeat2009.com.