Online receipt scanning and expense management service Shoeboxed.com wants to become an essential tool for mobile businesspeople. The company recently introduced an iPhone app that lets users upload pictures of their receipts to be scanned and indexed. Using proprietary optical character recognition and computer learning technology, Shoeboxed lists the vendor, purchase date, and expenditure type for each receipt in an easy to use format.

The iPhone app is efficient, processing my crumpled up grocery receipts correctly in under 15 minutes. I was quickly able to edit and add categories for all of my receipts, dividing them into easy to understand categories. Users can view receipt information on Shoeboxed as well through integration with other business applications such as Quicken and TurboTax. The one main drawback is Shoeboxed does not currently itemize items on a receipt, only giving you the total, which could pose a problem when certain professional expenses are mixed in with personal purchases. 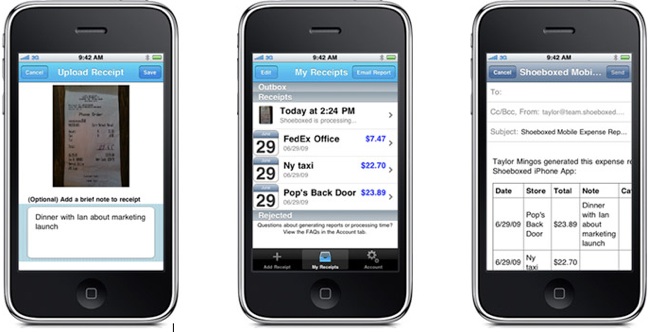 Mingos said Shoeboxed’s technology enables it to scale while keeping costs down: “With millions of receipts in the system, the more we process the better we get. Our operators can manually correct any mistakes with a couple of keystrokes.” The company won’t release user numbers, but Compete estimates that the site’s traffic peaked at just above 50,000 unique users during the last tax season. Mingos mentioned that many accountants are starting to join the service and that many are offering discounts to Shoeboxed users.

In hopes of spurring further growth, Shoeboxed has adopted an open strategy that allows other services to integrate Shoeboxed data. The company is looking to expand its offerings across multiple platforms, specifically on the mobile web. “We have an API, so if somebody wants to create an unofficial Android or WebOS app for Shoeboxed, we’re fine with that,” said Mingos.

As a founding member of web app group The Small Business Web, which launched at this past year’s SXSW festival, Shoeboxed is integrated with and cross-promotes small business apps like Outright and Freshbooks. The group’s members collectively provide a complete suite of products with no upfront hardware or software costs. Premium services from Shoeboxed start at $9.95 for unlimited online and 50 mailed in receipts monthly, with most Small Business Web members pricing their premium offerings starting at around $10 monthly. As businesses scale up, adding users and services, those monthly fees can add up to thousands of dollars annually. Without bundling the group’s offerings into an affordable bundle, an a la carte pricing structure will eventually force larger users to adopt more integrated solution like Quickbooks, to which Shoeboxed data can be easily added.

Mingos is bullish on the company’s prospects. “The recession didn’t faze us, as we’ve had continuous growth since we introduced Shoeboxed,” he said. According to Mingos, Shoeboxed is almost revenue positive despite spending considerable resources on marketing to meet ambitious growth targets. The company is looking to raise another round of funding sometime in the near future and, with the European connections of its founders and angel investors, has an eye on expanding outside the U.S.