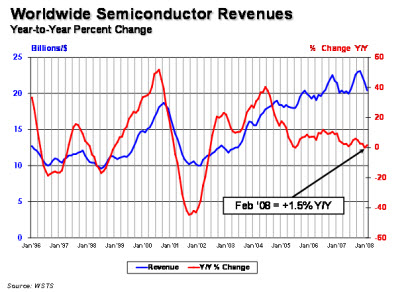 The chip industry has a brighter forecast than during the summer, but 2009 will still go down as a dismal year with a 11.6 percent decline in revenues, according to the semiconductor industry’s trade group.

“The new forecast is brighter than our earlier projections, reflecting an improving global economy,” said SIA president George Scalise in a statement. “Unit sales of key demand drivers – including PCs and cell phones, which together account for about 60 percent of semiconductor demand – have been stronger than previously predicted. We remain cautiously optimistic for the longer term. The current forecast is closely tied to projections of continuing improvement in the worldwide economy.”