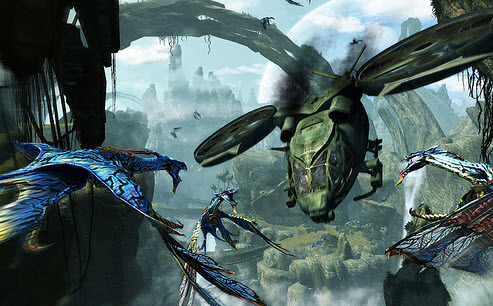 Few movies are as eagerly anticipated as James Cameron’s Avatar, a sci-fi epic that has been almost 14 years in the making and is hitting theaters on Dec. 18.

Accompanying the film release is a major video game from Ubisoft dubbed James Cameron’s Avatar the Game. I got a good look at it this week for the first time since I saw it at the E3 trade show in June. Unfortunately, this game suffers from the comparison to the film — which looks outstanding — and it suffers from the age old curse of the movie game genre. The game isn’t bad, but it’s not as outstanding in its detailed nuances as others on the market now, like Sony’s Uncharted 2: Among Thieves. I’ll explain more in a bit.

The good thing about the game is that it takes place on the same gorgeous distant world, Pandora, as the film. In the movie, human invaders doing the bidding of a private corporation attack a rainforest-like world and its indigenous alien race, the Na’vi. The Na’vi are blue-skinned humanoid warriors who are 10-feet tall, but they stand in the way of the human interest in mining Pandora for its precious mineral. The Na’vi use the creatures and environment of Pandora to resist the high-tech weaponry of the humans. The “avatars” from the film’s title are humans who are implanted into Na’vi bodies so they can breathe the toxic air of Pandora. If you think of native Americans trying to hold back an onslaught of white settlers, you get a feel for the plot. 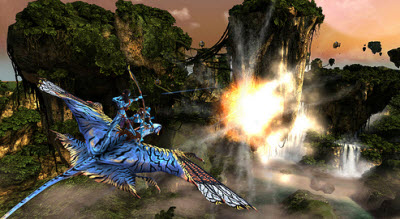 The game was started as a major project about 2.5 years ago. With Cameron’s blessing, Ubisoft’s Montreal studio created a new story with different characters than in the movie. You can play as either a member of the human Resources Development Administration (RDA) or as the Na’vi. You have to make that choice early on, but the game doesn’t presume that one side or the other is the good or the bad, says Kevin Shortt, lead script writer and story designer for the game. (See our video interview with Short).

As a human, you play the RDA signal specialist Able Ryder. You have to help the human forces locate and take over a sacred Na’vi site on Pandora. You have all sorts of weapons from machine guns to grenades to take care of Pandora’s many evils, from flying dragons to wolf-like creatures on the ground. They come charging out of the lush surroundings, forcing you to stay on your guard and shoot while you’re trying to avoid being skewered. You also have to try to take down the Na’vi, who are huge but are armed with maces, swords and bows. 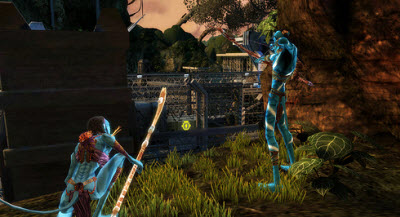 As a human, you can hitch rides in dune buggies, boats and giant helicopter-like gunships. You can also step into a giant robot Mech suit that comes with lots of armor and firepower. When you arrive on Pandora, you have to deal with viper wolves and try to figure out if a traitor is feeding intelligence to the local Na’vi. You can switch weapons, using flamethrowers to scorch hostile plants.

As the Na’vi, you have the added advantage of the ability to turn invisible, sprint, heal yourself, or repel enemies. You can jump far and take out humans with a shot of your bow. While you can take the humans out in hand-to-hand combat when you surprise them, you are doomed to failure if you take the human weapons on in a frontal assault at a reasonable distance. The secret is to use tricks like a stun attack that disables humans long enough for you to close on them and take them out in hand to hand combat.

This is probably the only game I’ve ever seen where it actually looks good when you play it with 3-D glasses on your head. You can see the depth of the dense jungle, for example. Unfortunately, most of us don’t have the 3-D hardware and the huge TVs that really make the glasses worthwhile. 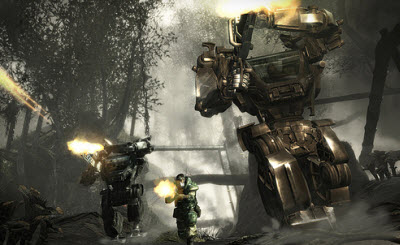 The worst thing about Avatar the Game is that it doesn’t live up to its looks. The world is gorgeous in the movie and the action is intense. The choices the main character makes are difficult. But you don’t feel that dramatic intensity in the game. The environment looks so real, but when you shoot creatures, there is no blood. Rather, the creatures sort of evaporate. When you target your rivals, reticles appear around them. This all reinforces to the player that this is a game, not a riveting experience that is aimed at convincing you it’s real.

The flying and driving parts of the game are cool. But the core combat is where I find it lacking. The weapons of the Na’vi just aren’t that fun. You can fire an arrow at a heavily armored human and take the human out with a single shot. And the human soldier doesn’t even scream. It seems to me that there is too big a mismatch between the two sides. The humans have too much of an advantage when they are firing from a distance. So much so that all they have to do to win is concentrate fire on the Na’vi and hope they never run out of ammo. Meanwhile, when the fighting is in a confined space and is hand-to-hand, the Na’vi are unstoppable. It may sound like this should make for a balanced game, but it does not in my opinion. The Na’vi need more long-range weapons, while the humans need a way to survive in close combat. Each side can use terrain or stealth to tip the odds, but I foresee a lot of frustration for players on either side.

The game is going to be available on all major platforms. I have no doubt that, like Ubisoft’s old King Kong game based on Peter Jackson’s film remake, this game is going to sell millions of units because it will be associated with what is bound to be a popular movie. I think a lot of people will play it because it’s fun to look at, but not because it’s fun to play. The game just isn’t that good, and that’s a shame.

I haven’t played the whole game and haven’t spent a lot of time with it. These are just my initial impressions and I’m hoping I’ll be proven wrong and that the game is really good. But based on my instincts and what I’ve seen so far, I suggest you see the movie (watch the trailer here) but opt for one of the better games out this fall, like Modern Warfare 2 or Unchart 2: Among Thieves.